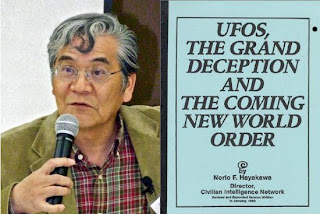 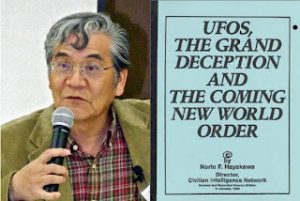 Norio Hayakawa, former ufologist and Dulce base researcher, concluded years ago UFOs are likely part of government deception towards goal of New World Order (NWO). Hayakawa published his thesis, "UFOs, The Grand Deception And The Coming New World Order," by the mid-nineties. It's not surprising then, Hayakawa likes Examiner stories written by former Reader's Digest roving editor, Randall Fitzgerald, who reported on the 1997 Phoenix Lights. Fitzgerald saved his notes and searching for answers wrote in 2010 a two part series, "Were the 1997 Arizona Lights a psychological warfare experiment?" part one and part two.

Fitzgerald couldn't overlook remarks made about mass sightings over Phoenix:

"The comments made to me not long after the event happened went like this: 'the mass behind the lights was more like a gray and wavy distortion of the night sky,' said witnesses Dana Valentine and his father.

'In the space between the arms, I pointed out to my wife how strangely the stars looked, almost as if looking through a very thick glass with the slight distortion of the light as it passed through,' remarked witness Tim Ley. 'It seemed that I was seeing the light through a kind of transparent waviness, like a mirage,' Ley further observed.

'There was a bright bottom quarter moon setting in the west, and as the front of the v-shaped craft entered the light of the moon, this black chevron object became translucent,' said witness Mike Fortson. 'We could still see the bottom quarter moon through the object, but the moon turned a dingy yellow.'

An obvious question arises. Was this single object image a projection?"

Fitzgerald concludes the March 13, 1997 incident over Phoenix represents a psychological warfare test and suggests originated south of Tucson at Fort Huachuca "...home to the U.S. Army Intelligence Center, which trains military intelligence personnel for all four branches of the U.S. military. The Thunderbirds performance air team trains here. It has an Electronic Proving Ground and a training center that specializes in imagery, deception, counterintelligence and electronic intelligence." Psychological warfare tactical training occurs at Fort Huachuca."

A tip of the hat goes to Fitzgerald for his astute writing, his observations strongly support, at least some sightings, are due to holographic projections. Were there more phenomena mixed together that night? Would you expect less from the military who also dropped flares to add to the confusion? There will be a follow up to examine what else was in the air?

A nice companion to this article, in parts on YouTube below, is UFO Hunters episode on Phoenix Lights. The 2008 coverage reveals some black ops projects created V-shaped dirigibles with hard exteriors that fit description, according to source with a Mesa, AZ museum. What to believe?