from raw replay: The man who headed the NSA and CIA under President George W. Bush suggested Friday that mercenaries were needed to deal with growing cyber threats. Gen. Michael Hayden told the Aspen Security Forum that in the near future, the Department of Defense may have to allow the creation of a "digital Blackwater." ... Watch the entire Aspen Security Forum on cyber security here.

flashback: hayden says US should be able to shut down internet

update: a digital blackwater for an internet 9/11? 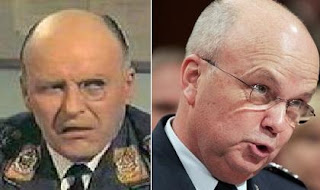 Is Michael Hayden, the former NSA and CIA Boss, pictured on the left or right? "Let me really throw out a bumper sticker for you. How about a digital Blackwater?" Hayden told the Aspen Security Forum." as reported by Kurt Nimmo in a recent infowars.com article. Nimmo gets it right when he reports, "Hayden was speaking for the bankers and the globalists when he said there needs to be a mercenary army to attack enemies of the private sector, i.e., enemies of the banks and their transnational corporations." Cyber Command has, likely, hundreds if not thousands of desktop warriors that troll the net. What is desirable about a digital version of Blackwater? It's the degree of separation from government laws.

A digital Blackwater would likely be permitted to try anything--no holds barred--to put a vise grip on the net without shutting it down! Nimmo sizes up our present cyber-dilemma, "the cyber terror narrative was contrived in large part to demonize the alternative media and manufacture consensus for physical attacks on ideological enemies. The global elite are perturbed by the popularity of the electronic medium invented by the Pentagon and initially deployed as a surveillance mechanism. The plan went awry, however, when activists turned the medium into a highly effective activism and informational tool." The internet provides an effective forum for communications that still lies beyond the grip of corporate censorship and control!

Does a digital Blackwater represent the next way station on the road to an internet 9/11? The resemblance of the two men in the picture you ask? They both impress as ciphers! What about a bumper sticker for the masses? Global elite want a free and open internet (or they'll have to leave the house for xxx-purchases)!