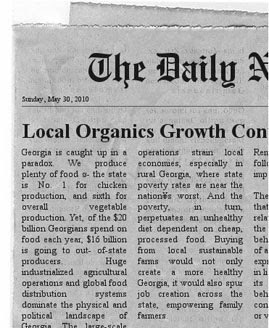 There is a new article making the rounds in the mainstream media this morning. It is similar to some which surfaced last month about a study condemning organic food, and it’s purported health benefits. These articles and the studies they report on compound cognitive dissonance in the public, allowing them to continue their unhealthy lifestyles, and increase their reliance on medical authorities. These organizations pay lip service to trying to bring health to all, but only benefit when people are sick and so it pays for them to keep people in that state.

The ambiguous introduction we are presented with says little. It familiarizes us with our “Authority“, “the nation’s leading pediatricians group“. Then continues, “Parents who want to reduce their kids’ exposure to pesticides may seek out organic fruits and vegetables, but they aren’t necessarily safer or more nutritious than conventional foods.” The phrase “aren’t necessarily safer” implies surety, without being legally binding. The truth is there are many studies showing the negative health impacts of pesticides, on children and adults. The long term effects are not known, but more data is coming out all the time showing that pesticides and herbicides stay in the environment much longer that previously stated by biased industry reportage.

We are told the official title of our Authority, the American Academy of Pediatrics, after the statement, “Science hasn’t proven that eating pesticide-free food makes people any healthier“. Which begs the question: Why hasn’t science proven, or dis-proven that “eating pesticide-free food makes people any healthier“? Perhaps this would not fit with their agenda? If it was really important for these organizations to protect people’s health these studies would have been done long ago and the information would have been circulated. That this has not happened shows that there is something they wish to hide from the public.

Dr. Janet Silverstein, a co-author of the academy’s new report and a pediatric endocrinologist at the University of Florida in Gainesville says: “Theoretically there could be negative effects, (from pesticides) especially in young children with growing brains, but rigorous scientific evidence is lacking. We just can’t say for certain that organics is better without long-term controlled studies…” The amount of pesticide in conventional produce was deemed “within safety limits” in a widely discredited Stanford University study released last month. I would encourage people to investigate further the implications of this statement. Look up pediatrics, brain development, pesticides, and nutrition. See what studies are not being mentioned here. Also look into what is considered “safety limits” when pesticides are concerned and what are the effects when those limits are exceeded.

The article finishes off by presenting the food pyramid propaganda model: “a diet rich in fruits and vegetables, whether organic or not, along with plenty of whole grains and low-fat or fat-free dairy products“. This is refuted by Sally Fallon in her documentary film The Oiling of America, the Weston A Price foundation, William Davis Md. in his book Wheat Belly, and many others. The food pyramid diet actually makes people unhealthy in the long term and leads to degenerative illness, due to lack of proper nutrition. The lack of good, healthy fats and proteins in the diet also lead to mental impairment, and lack of energy.

These types of articles will continue to appear, muddying the water for those unsure of how to lead a healthy lifestyle. For those who already understand the implications of nutrition, or lack thereof for well-being it is annoying, infuriating and saddening to read periodically these assertions. We are left to wonder whether there is any hope, when the vast majority of the population will take them as fact, fooled by the false appeals to authority strung throughout the article. Without any data pertaining to the study in question the public readers have few options but to accept the rhetoric presented. Even though the study concluded that: “The published literature lacks strong evidence that organic foods are significantly more nutritious than conventional foods. Consumption of organic foods may reduce exposure to pesticide residues and antibiotic-resistant bacteria.” And in another article on the AAP’s website a Dr. Joel Forman said: “At this point, we simply do not have the scientific evidence to know whether the difference in pesticide levels will impact a person’s health over a lifetime, though we do know that children – especially young children whose brains are developing – are uniquely vulnerable to chemical exposures”.

Don’t believe the hype people. Read between the lines. Ask where is the data. Ask who benefits. The idea that degenerative, chronic illness is an inevitable consequence of life is bogus. The assertion that organic, natural farming methods can’t feed all the people in the world is bunk. Find an organic farmer and start supporting them, and yourself. They need your help and you need theirs. Grow your own food, if you can. See the benefits in the real world. Don’t believe some anonymous person writing an article on the internet. But if you have to take someone’s word as a starting point, go for the one who’s not getting paid to voice it.