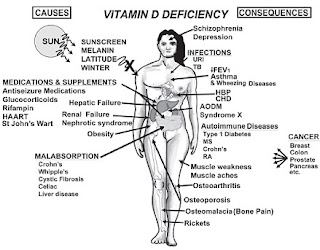 In the news recently, some articles have caught attention with a surprising assertion. Apparently a study linking lower levels of vitamin D with longevity has been put forth by the CMAJ Canadian Medical Association Journal. I would take the "conclusions" of this study with a large grain of salt, as there are several problems with this study which I will go into.

"Low levels of vitamin D may be associated with longevity, according to a study involving middle-aged children of people in their 90s published in CMAJ (Canadian Medical Association Journal)." Later in the introduction of the article it states, "Previous studies have shown that low levels of vitamin D are associated with increased rates of death, heart disease, diabetes, cancer, allergies, mental illness and other afflictions. However, it is not known whether low levels are the cause of these diseases or if they are a consequence."

"We found that the offspring of nonagenarians who had at least 1 nonagenarian sibling had lower levels of vitamin D than controls..."

Strangely this goes against some reports which previously expressed the opposite. Not to mention the numerous other health benefits connected with adequate levels of the vitamin.

"The benefits of vitamin D are endless including a reduced risk of developing polyps in the colon, prostate cancer, coronary artery disease and Type 1 Diabetes. Muscle strength is improved with this vitamin as well as better coordination, balance and stronger bones. A severe deficiency can cause rickets in children and a lesser deficiency can cause vision problems, insomnia, diarrhea, loss of appetite, a burning sensation in the mouth or throat and weight loss."

"...the importance of Vitamin D for overall health and vitality, absorption of calcium and phosphorus, growth of bones and teeth, muscle strength, regulations of heartbeats, prevention of breast and colon cancer, osteoarthritis, osteoporosis, thyroid function and normal blood clotting however many do not realize how important it is for health and longevity of the largest organ in the body – your skin."

In the study they admit to the correlation, but not the causation of purported health benefits of vitamin D. With the usual unimaginative materialist fixation of grant funded scientists they fail to observe that correlation and causation in this case are one and the same. Vitamins, minerals, etc. are the things we obtain from foods in order to continue our bodily processes. It's really that simple. When we consume "foods", or food like products that our bodies do not recognize, have the ability to process, or contain toxic chemicals, we are forced to give up large amounts of these beneficial substances to neutralize and expel or store it. Guess what? Most toxic substances are stored as Fat after they are neutralized!

"Previous studies have shown that low levels of vitamin D are associated with increased rates of death, heart disease, diabetes, cancer, allergies, mental illness and other afflictions. However, it is not known whether low levels are the cause of these diseases or if they are a consequence."

"We found that the offspring of nonagenarians who had at least 1 nonagenarian sibling had lower levels of vitamin D than controls, independent of possible confounding factors and SNPs [single nucleotide polymorphisms] associated with vitamin D levels," write the authors. "We also found that the offspring had a lower frequency of common genetic variants in the CYP2R1 gene; a common genetic variant of this gene predisposes people to high vitamin D levels."

It is still difficult for scientists to conclude anything positive about vitamins, as can be seen in the quote below.

"However, although the majority of observational studies report associations between vitamin D deficiency and susceptibility to a range of pathologies, some studies are null, and a few report opposite associations. The existing evidence is thus not sufficient as a basis for a universal policy of high-dose vitamin D supplementation."

The study could not use the actual nonagenarians and so followed their offspring instead, hoping to receive the same, or similar results. We know that there are many toxins and unknown factors floating around in the environment these days, in the 50`s, 60`s when these control subjects were raised. Much more so than their parents generation, who were invariably raised on pre-ww2, organic food. Scientists mostly seem unable to recognize this difference in environmental factors which contribute to a persons longevity to a greater degree than that of a gene regulating vitamin D retention and lower levels of a vitamin we know to be associated with all sorts of health benefits. Not to mention a vitamin being low-balled for it`s daily recommended intake.

Winter is coming and with it will follow SAD, or seasonal affective disorder. Regular supplementation with Vitamin D3 has been shown to stop these symptoms. The daily dosage, set at 600 iu, or near, can be seen here. Some articles I have seen suggest using high doses of D3, even up to 15000 iu. But the regular dose of 1000 ui. one drop from a liquid oil based product should be sufficient for most people daily hoping to stop seasonal depression, strengthen the immune system against cold and flu, help teeth, bones, and prevent a number of other degenerative processes.

Finding a supply of liquid Vitamin D3 is fairly easy, most health food stores, vitamin shops,and some grocery stores and drugs stores carry it. Look for a product which is certified organic. Some use water as a base, though the better value is the oil based product, which can last up to a year from a bottle that costs around twenty dollars. Such a small expenditure can help in so many ways. Along with a healthy diet and lifestyle, vitamin D is the one supplement I would never bother to go without.