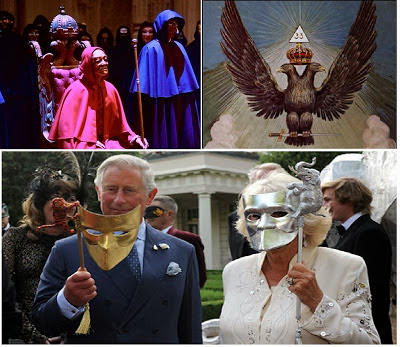 Vigilant Citizen (VC) addresses secret society ritual in second article - pretty interesting stuff.  Our protagonist Bill seeks out new experience, upon learning of his wife's temptations through her own honest admission.   Bill encounters an old friend, Nick Nightingale at the beginning of his night out on New York:

"Bill meets his old friend Nick Nightingale at a jazz cafe. The professional piano player reveals to Bill that he is sometimes hired by mysterious people to play, blindfolded, during mysterious parties that are full of beautiful women. This juicy piece of information intrigues Bill to the highest degree because, since his talk with his wife, he is appears to be looking for some kind of … experience. Nick ultimately makes a big mistake and agrees to provide Bill with all of the information needed to access the venue.

A nightingale is type of bird that is known for singing at night, just like Nick Nightingale 'sings' secret information at the start of Bill’s fateful night.

The password to enter the ritual is 'Fidelio', which means 'faithfulness', a main theme of the movie."

Our protagonist enjoys benefits of a bird (Nightingale) singing secrets into his ear, including passwords with multifaceted meanings:  "fidelity" - of secret societies and Bill's relationship with Alice.  VC adds, "...as Nightingale points out, 'Fidelio' is the name of an opera written by Beethoven about a wife who sacrifices herself to free her husband from death as a political prisoner. This password actually foreshadows what will happen during that ritual."

Kubrick sets location for secret society ritual in Somerton on Long Island.  The actual location to reflect real occult elite, Mentmore in the United Kingdom built in 19th century by a Rothschild. VC observes: "By selecting this location, was Kubrick trying to show his audience the 'real world' equivalents to the ultra-elite shown in the movie? Incidentally, the name of Bill’s connection to the elite, Victor Ziegler, is of German-Jewish origin, like Rothschild."

The location and Venetian masks worn by participants (like Prince Charles and Camilla, above picture) are indispensable in portraying elite, especially, their dark anonymous side.  VC points out:  "Venetian masks were originally worn during the Italian Renaissance in Venice and were a way for the powerful elite of the time to indulge in debauchery without reprisal." The straightjacket of social mores suspended for an evening.

The movie's complexion turns dark when taken inside, according to VC:

"When Bill enters Somerton, everything about the movie changes...The music in the movie also changes drastically. The song heard in the background is called 'Backwards Priests' and features a Romanian Orthodox Divine Liturgy played backwards. The reversal or inversion of sacred objects is typical of black magic and satanic rituals. By having this Christian liturgy played backwards right before widespread fornication is Kubrick’s way of stating that the elite is nothing less than satanic."

A 1972 Rothschild Ball resembles much of what Kubrick puts in movie. A recent Infowars article does excellent job capturing occult character of event: "Rothschild Ball Exposes Elite’s Fascination with Occult." VC "...wonders if this [1972] party 'degenerated' into something resembling what is shown in Eyes Wide Shut." The present writer would be willing to venture further - it's a safe bet!

"This peculiar Indian atmosphere, combined with the lascivious scenes witnessed by Bill as he walks around the house, ultimately points towards the most important, yet most hidden part of the movie: Tantric Yoga and its Western occultism derivative, Sex Magick. This last concept was 'imported' by British occultist Aleister Crowley and is now at the center of the teachings of various secret societies...Tantric concepts were incorporated in two important secret societies: the A.:A.: and the OTO (Ordo Templi Orientis). The OTO is still extremely influential in elite circles and reaches the highest levels of politics, business and even the entertainment industry. At the core of these orders is the Thelema, a philosophy created by Aleister Crowley that he summed up with the saying 'Do What Thou Wilt'. This saying is actually a translation of 'Fais ce que tu voudras' the motto of an 18th century secret society, the infamous Hellfire Club."

"Hellfire Clubs were said to be 'meeting places of "persons of quality" who wished to take part in immoral acts, and the members were often very involved in politics'. According to a number of sources, their activities included mock religious ceremonies, devil worship and occult rituals. Although details are vague regarding that elite club, they were known for performing elementary Satanic rites as a prelude to their nights of fornication. These acts were however not just 'for fun' or to 'shock people' as some sources might claim, the members were initiates of occult mysteries and their rituals were based in ancient rites involving invocations and other forms of black magick. In short, although Kubrick never actually names the secret society infiltrated by Bill, there are enough clues to understand what kind of club he is referring to. Most importantly, he is telling his viewers: These societies still exist … and they are more powerful than ever."

Finally, at the ritual itself, VC clues us in on the Magic Circle: "Magic circles is concept used in ritual magic during invocations....High Priest, dressed in red, performing a ceremonial routine. He is at the center of a 'magic circle' (picture above, top left) formed by young women who are very likely to be Beta Kitten slaves. Later, when Bill is unmasked, another magic circle is formed."  VC asks appropriately about the High Priest's chair: "...double-headed eagle [picture, above right] is one of the most ancient and prominent symbols of Freemasonry. A crowned double headed eagle is representative of the 33rd degree of Freemasonry, the highest degree attainable. Is Kubrick implying that the High Priest is a 33rd Degree Freemason?"  Kubrick was a close friend to Arthur C. Clarke, a high mason, so our answer should be clearly "yes."

Then, in a highly dramatic scene, "...when Bill gets caught and gets (literally) unmasked by the High Priest, Amanda appears at the balcony....and tells the High Priest she wants to 'redeem' him, in a tone that approaches ritual drama. The Priest then replies 'Are you sure you understand what you’re taking upon yourself in doing this?' This implies that she will be repeatedly abused and then sacrificed," informs VC, who adds the back story for Amanda, "at the beginning of the ritual, one of the Beta slaves goes to Bill and
urges him to leave the house before he got caught. We ultimately learn
that it was Amanda, the girl that was passed out in Ziegler’s bathroom. 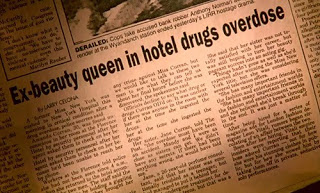 In a stroke of genius, VC illustrates impressive ability to spot nearly everything:

"By freeze-framing and actually reading the above news article about Amanda, we learn important details about Amanda’s background (classic hidden sub-plot integration by Kubrick). To those 'in the know', the article perfectly describes the life of an entertainment industry Beta Programming slave (i.e. Marilyn Monroe). We indeed learn that Amanda was 'emotionally troubled' as a teen and underwent 'treatments' (a code word for MK Programming perhaps?), she had 'important friends in the fashion and entertainment worlds', and she had an 'affair' with a powerful fashion designer who got 'wowed by her private, seductive solo performances' (typical behavior of a Beta Kitten). What the article however conveniently doesn’t mention is that she was selling her body to elite people and being used in their occult rituals."

"In the movie’s end credits (and sources such as IMDB), it is listed that the role of the High Priest was played by 'assistant director' of the movie, Leon Vitali. If one carefully reads the news article mentioned above, Leon Vitali is the name of the London fashion designer Amanda had an 'affair' with. Furthermore, the High Priest has an unmistakable English accent. We can therefore deduce that the High Priest is the fashion designer...This hidden subplot is interesting as it reveals the true nature of the fashion and entertainment industry. High-ranking individuals in these fields are initiated in occult secret societies and deal with MK slaves."

In the coup de gras for Amanda, and a chilling reminder to readers, VC reiterates usual refrain given  profane public for consumption: "Ziegler proceeds to telling Bill the same stuff media tells the masses when someone has been sacrificed by the elite: She OD’ed, she was a junkie, it was only a matter of time, and the police did not see any foul play."  It's chilling indeed, readers may find a healthy skepticism when given such a pat answer in future.

The detective work in part 2 borders on brilliant.  VC contrasts public perception and reality of occult:  "Regular people are lead to believe that these elite rituals are nothing more than goofy meetings of people with too much time on their hands. In reality, these elaborate rituals often incorporate real attempts at Black Magick and include real blood sacrifices and other terrible acts."

In part 3, VC will show movie to be one big "magickal" journey concerned with life's opposing forces!