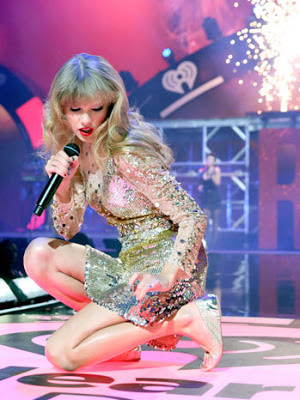 from hollywoodreporter.com: It’s staggering that 22-year-old Taylor Swift earned $57 million and Katy Perry $45 million. How is it possible that such monumental fortunes could be accumulated by performers whose songs have barely escaped the hackneyed teenybopper genre? But more important, what do the rise and triumph of Swift and Perry tell us about the current image of women in entertainment?

Despite the passage of time since second-wave feminism erupted in the late 1960s, we’ve somehow been thrown back to the demure girly-girl days of the white-bread 1950s. It feels positively nightmarish to survivors like me of that rigidly conformist and man-pleasing era, when girls had to be simple, peppy, cheerful and modest. Doris Day, Debbie Reynolds and Sandra Dee formed the national template -- that trinity of blond oppressors!

As if flashed forward by some terrifying time machine, there’s Taylor Swift, America’s latest sweetheart, beaming beatifically in all her winsome 1950s glory from the cover of Parade magazine in the Thanksgiving weekend newspapers. In TV interviews, Swift affects a “golly, gee whiz” persona of cultivated blandness and self-deprecation, which is completely at odds with her shrewd glam dress sense. Indeed, without her mannequin posturing at industry events, it’s doubtful that Swift could have attained her high profile.