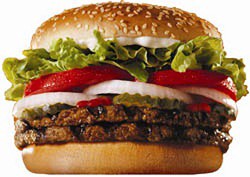 from thinkprogress.org: Technology companies have mastered the use of schemes involving low-tax foreign countries in order to avoid billions of dollars in American taxes each year. Now, fast food chains like McDonalds, Burger King, and Subway are doing the same. When the companies create a product, like Burger King’s Whopper hamburger, they can classify it as intellectual property. Franchises then pay a fee to the company to sell the product and use the company logo. But instead of collecting the fees in the United States, where the intellectual property filings were created, Burger King, McDonalds, and other chains often house the fees in other low-tax countries in order to save millions of dollars, as Reuters’ Tom Bergin reports:

“In Burger King’s case, the IP was created in the United States, home of the Whopper. But the fee the European units pay to use it goes to Burger King’s main European office in Zug, Switzerland. There the effective tax rate could range from 2 percent to 12 percent, according to Thierry Boitelle, tax partner with law firm Bonnard Lawson in Geneva. Zug-based Burger King Europe GmbH retains the payments, a Burger King spokesman said. Had the fee been remitted to the United States it would have faced a tax rate of 35 percent to 39 percent.“

McDonalds and Burger King each have overseas headquarters in Switzerland. Subway sends most of its overseas profits to Curacao, a low-tax haven in the Caribbean. Coffee-chain Starbucks also utilizes the intellectual property loophole to help reduce its corporate tax rate — Reuters reported that it successfully avoided millions of pounds in British taxes last year. The companies’ tax rates differed: Starbucks paid 31 percent in the U.S. but just 13 percent overseas; Burger King also paid 13 percent on overseas income, while McDonalds paid 20 percent. None of the maneuverings used by these companies is illegal, but they do come at a substantial cost to taxpayers. In the U.S., corporate tax avoidance cost the average individual taxpayer $434 in 2010, according to the California Public Interest Research Group.