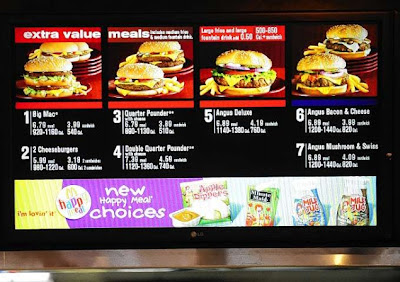 from nydailynews.com: Fast food chains are doing a bad job of making nutritional information of their menu items clear and easy to digest, according to a recent study. As they exist now, researchers from the Columbia University School of Nursing said that calorie counts on US menus require "complex math skills" to interpret, rendering the information essentially useless. For example, a bucket of chicken was listed as having anywhere from 3,240 to 12,360 calories -- a huge range in calories. Nor did the menu board reveal the number of chicken pieces in a serving size, the study pointed out. A sub sandwich meal was also listed as having between 500 to 2,080 calories but no specifics were given on which kinds of sandwiches fell on the lower or upper end. For the study, which was announced February 23, a team of volunteers canvassed neighborhoods in Harlem, New York, armed with digital cameras and collected the nutritional information of 70 menus from 12 restaurant chains. The researchers studied the calorie counts for 200 food items. Chains weren't identified in the study. Restaurants in the US with 20 or more locations are now required by law to provide calorie counts and additional nutritional information.