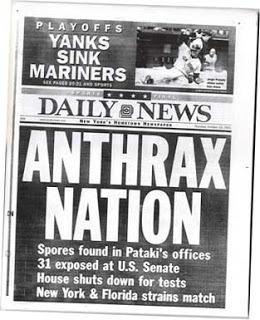 from mcclatchy: Buried in FBI laboratory reports about the anthrax mail attacks that killed five people in 2001 is data suggesting that a chemical may have been added to try to heighten the powder's potency, a move that some experts say exceeded the expertise of the presumed killer... The apparent failure of the FBI to pursue this avenue of investigation raises the ominous possibility that the killer is still on the loose. A McClatchy analysis of the records also shows that other key scientific questions were left unresolved and conflicting data wasn't sorted out when the FBI declared Ivins the killer shortly after his July 29, 2008, suicide... "America, the most advanced country in the world, and the FBI have every resource available to them," [Jacobsen] said. "And yet they have no compelling explanation for not properly analyzing the biggest forensic clue in the most important investigation the FBI labs had ever gotten in their history." As a result of Ivins' death and the unanswered scientific issues, Congress' investigative arm, the Government Accountability Office, is investigating the FBI's handling of the anthrax inquiry.