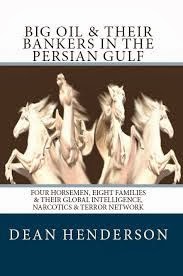 "According to former British intelligence agent John Coleman’s book, The Committee of 300, the Rothschilds exert political control through the secretive Business Roundtable, which they created in 1909 with the help of Lord Alfred Milner and South African industrialist Cecil Rhodes. The Rhodes Scholarship is granted by Oxford University, while oil industry propagandist Cambridge Energy Research Associates operates out of the Rhodes-supported Cambridge University."

A fuller perspective how far beyond control of wealth and energy resources agenda covers can be appreciated in Coleman's "21 Goals of the Illuminati and Committee of 300." Coleman diagrams relationship between Committee of 300 and Business Roundtable in a global matrix. Rothschild influence becomes apparent in creation of Israel, as Henderson contends, intended as "lynchpin" to control world's oil supply:

"In 1917 British Foreign Secretary Arthur Balfour penned a letter to Zionist Second Lord Lionel Walter Rothschild in which he expressed support for a Jewish homeland on Palestinian-controlled lands in the Middle East. Balfour Declaration justified the brutal seizure of Palestinian lands for the post-WWII establishment of Israel. Israel would serve, not as some high-minded 'Jewish homeland', but as lynchpin in Rothschild/Eight Families control over the world’s oil supply. Baron Edmond de Rothschild built the first oil pipeline from the Red Sea to the Mediterranean to bring BP Iranian oil to Israel. He founded Israeli General Bank and Paz Oil. He is considered by many the father of modern Israel."

It also becomes obvious why Iran is still a lightning rod of political discord, Iran never forgiven for nationalizing its oil industry. It's not about Iran securing nuclear weapons. It's likely, Iran already possesses nukes obtained from financially strapped Russian interests during turmoil in early nineties associated with fall of Soviet Union.

The secretive Business Round Table is not without Illuminati influence as name itself comes from King Arthur's Roundtable. Henderson clues us in on inner circle as Round Table takes on more resemblance to esoteric adventure than business enterprise:

"Roundtable inner Circle of Initiates included Lord Milner, Cecil Rhodes, Arthur Balfour, Albert Grey and Lord Nathan Rothschild. The Roundtable takes its name from the legendary knight of King Arthur, whose tale of the Holy Grail is paramount to the Illuminati notion of Sangreal or holy blood."

Global control achieved as one would imagine by buying up controlling interests, according to Henderson, who quotes Coleman:

"John Coleman writes in The Committee of 300, 'Round Tablers armed with immense wealth from gold, diamond and drug monopolies fanned out throughout the world to take control of fiscal and monetary policies and political leadership in all countries where they operated.'"

The Business Round Table follows up with propaganda arm in 1917, the Royal Institute of International Affairs:

"In 1917 Rothschild’s Business Roundtable spawned the Royal Institute of International Affairs (RIIA) in London. The RIIA soon sponsored sister organizations around the globe, including the US Council on Foreign Relations (CFR)... The RIIA is a registered charity of the Queen and, according to its annual reports, is funded largely by the Four Horsemen. Former British Foreign Secretary and Kissinger Associates co-founder Lord Carrington was President of both the RIIA and the Bilderbergers."

Perhaps, most interesting, Henderson reveals saturation of RIIA with members of secret societies and family bloodlines:

"Colonel Edward Bulwer-Lytton led the English Rosicrucian secret society, which Shakespeare opaquely referred to as Rosencranz, while the Freemasons took the role of Guildenstern. Lytton was spiritual father of both the RIIA and Nazi fascism. In 1871 he penned a novel titled, Vril: The Power of the Coming Race. Seventy years later the Vril Society received ample mention in Adolf Hitler’s Mein Kampf. Lytton’s son became Viceroy to India in 1876 just before opium production spiked in that country. Lytton’s good friend Rudyard Kipling worked under Lord Beaverbrook as Propaganda Minister, alongside Sir Charles Hambro of the Hambros banking dynasty."

"James Bruce, ancestor to Scottish Rite Freemason founder Sir Robert the Bruce, was the 8th Earl of Elgin. He supervised the Caribbean slave trade as Jamaican Governor General from 1842-1846. He was Britain’s Ambassador to China during the Second Opium War. His brother Frederick was Colonial Secretary of Hong Kong during both Opium Wars. Both were prominent Freemasons. British Lord Palmerston, who ran the Opium Wars, was a blood relative of the Bruce monarchy, as was his Foreign Secretary John Russell, grandfather of Bertrand Russell."

The present writer relents from fatigue in attempt to keep pace with Henderson's outpouring of esoterica behind what are ostensibly charities, foundations and business interests. Readers can achieve good grasp of world affairs, if able to assimilate background Henderson shares. Henderson's book seems indispensible to readers, who look out for their own best interests and welfare!
Previous entries:
Fed Reserve Cartel: Part I
Fed Reserve Cartel: Part II