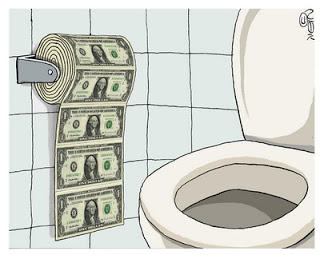 from cnbc: The Federal Reserve launched a controversial new policy on Wednesday, committing to buy $600 billion more in government bonds by the middle of next year in an attempt to breathe new life into a struggling U.S. economy. The decision, which takes the Fed into largely uncharted waters, is aimed at further lowering borrowing costs for consumers and businesses still suffering in the aftermath of the worst recession since the Great Depression. The U.S. central bank said it would buy about $75 billion in longer-term Treasury bonds per month. It said it would regularly review the pace and size of the program and adjust it as needed depending on the path of the recovery. In its post-meeting statement, the Fed described the economy as "slow", and said employers remained reluctant to add to payrolls. It said measures of inflation were "somewhat low."

Update: Big thanks to disinfo for picking this up