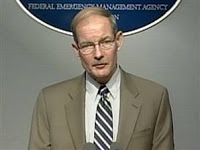 from msnbc: On Tuesday, FEMA held what was called a "news briefing" on the California fires, but the questions asked did not come from reporters. They were asked instead by FEMA staffers...

Apparently, the FEMA briefing was called with little lead-time and reporters didn't get there fast enough. Instead of acknowledging that reporters were not there they apparently pretended and even used the typical practice of calling a "last question."

The briefer, FEMA's Deputy Administrator Harvey Johnson, did not indicate that the questions were coming from staff who were in essence playing reporters. Six questions were asked and the phrasing and subject matter were not typical for a news briefing give and take.

Senior administration officials are looking into the matter and suggest the "intentions were good," but acknowledge that was not an appropriate "tactic."

The suggestion is that so many media questions had been coming in to FEMA and the briefing was a way to get information out. But instead of transparency, a senior FEMA official appears to have faked it.

update: update: fema faker fuckin' fired
from thinkprogess: Earlier today, ThinkProgress noted that former FEMA director of external affairs John “Pat” Philbin had resigned his position, only to be rewarded with a promotion. Today, Philbin was set to become the director of public affairs for Director of National Intelligence Mike McConnell. But the DNI’s office has since backed away from its offer, putting out a statement this afternoon that reads:

We can confirm that Mr. Philbin is not, nor is he scheduled to be, the director of public affairs for the Office of the Director of National Intelligence.