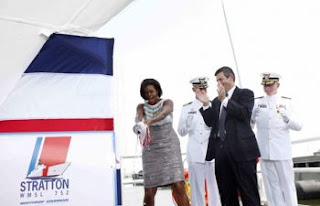 from food safety news: In an effort to bolster an embattled Gulf coast economy, First Lady Michelle Obama joined the chorus of Administration officials assuring the safety of Gulf seafood in a speech Friday.

"We're all relieved that the leak appears to have been stopped for now," said Mrs. Obama during an event to christen a Coast Guard Cutter in Pascagoula, Mississippi. "Today, I can share some more good news," said Mrs. Obama. "About one-third of the federal waters in the Gulf that were closed to fishing--more than 25,000 square miles--have been reopened. Also, the seafood from these waters has been tested and it is safe to eat."

In recent visits to the region, President Barack Obama and Vice President Joe Biden have publicly assuaged fears about the safety of fish, crab, and shrimp coming from the Gulf by dining at local seafood joints and touting the coordinated federal and local effort to keep oil-tainted seafood out of the marketplace.

In her remarks Friday, the First Lady also emphasized the Administration's effort to get locals back to fishing. "We are going to stand with you as long as it takes to clean this up and to help this region recover," said Mrs. Obama.

The White House announced late last week the First Family will vacation somewhere in the Gulf region in August to help boost tourism to a region struggling to maintain its reputation for beautiful beaches and high quality seafood.

"I want the whole country to know what I've been saying--there are beaches down here, and they are open, and they are beautiful," said Mrs. Obama Friday. "The best way that this country can help this region is to come down here, right, come here visit, support these communities."