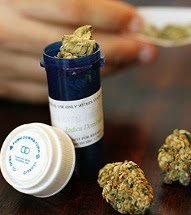 from reuters: The United States' first marijuana cafe opened on Friday, posing an early test of the Obama administration's move to relax policing of medical use of the drug.

The Cannabis Cafe in Portland, Oregon, is the first to give certified medical marijuana users a place to get hold of the drug and smoke it - as long as they are out of public view - despite a federal ban.

"Our plans go beyond serving food and marijuana," said Martinez. "We hope to have classes, seminars, even a Cannabis Community College, based here to help people learn about growing and other uses for cannabis."