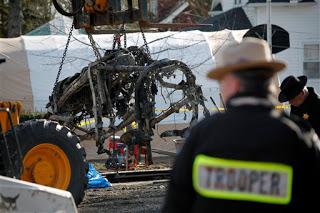 from bloomberg: Pinnacle Airlines Corp. pilots “went from complacency to catastrophe” in the February crash near Buffalo, New York, that killed 50 people, and didn’t recognize the danger, a U.S. safety board member said. National Transportation Safety Board member Debbie Hersman said during a hearing of the board today [may14] in Washington that the pilots performed tasks such as extending the landing gear without realizing their airspeed was plummeting. The board, in the last of three days of hearings, is examining hiring and training at Pinnacle’s Colgan unit and the possibility of pilot error and fatigue in the February crash. Senator Charles Schumer, a New York Democrat, wrote the Federal Aviation Administration today urging a reevaluation of training criteria for pilots.

The pilots’ incorrect responses to the plane’s aerodynamic stall showed “they were discombobulated,” Hersman said. “This crew went from complacency to catastrophe. They didn’t see it coming.” Cockpits may need automatic alerts to tell pilots their speed is dropping, she said. “I don’t see any evidence he ever understood the situation he was in,” Robert Key Dismukes, a NASA Ames Research Center expert on cockpit distraction, said of the plane’s pilot, Marvin Renslow. Conversations between Renslow, 47, and copilot Rebecca Shaw, 24, about icing on the plane were “leading them away from what to do next,” Dismukes said. Neither had much experience flying in icing, he said, based on his reading of the transcript from the cockpit flight recorder. Communications from a controller at a critical phase in the flight “didn’t help the workload situation,” he said.