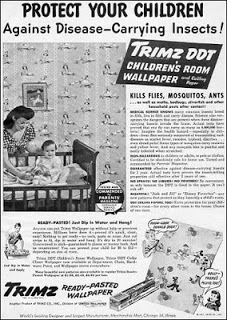 Food In US Still Tainted With Chemicals “Banned” Decades Ago 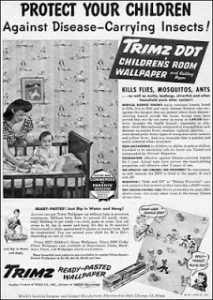 from alternet: In a photograph from a 1947 newspaper advertisement, a smiling mother leans over her baby's crib. The wall behind her is decorated with rows of flowers and Disney characters. Above the photo, a headline reads "Protect Your Children From Disease Carrying Insects." The ad, for wallpaper impregnated with DDT, captures a moment of historical ignorance, before the infamous insecticide nearly wiped out many birds and turned up inside the bodies of virtually everyone on Earth.

The story of DDT teaches a lesson about the past. But experts say it also provides a glimpse into the future. Thirty-eight years after it was banned, Americans still consume traces of DDT and its metabolites every day, along with more than 20 other banned chemicals. Residues of these legacy contaminants are ubiquitous in U.S. food, particularly dairy products, meat and fish.

Their decades-long presence in the food supply underscores the dangers of a new and widely used generation of chemicals with similar properties and health risks. "They're manmade, and they're toxic, and they bio-accumulate," said Arnold Schecter, a professor at the University of Texas School of Public Health who has been studying human exposure to chemicals for more than 25 years. "So the fact that they're still around a long time after they've been banned isn't surprising."