food needs abound all times of the year, not just holidays 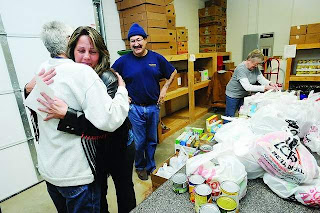 from baxter bulletin: While area food pantries traditionally receive a lot of donations this time of year, the needs are especially great after the holidays are over. Although the Mountain Home Food Basket happily received an unexpected donation before Christmas, the shelves often are bare the first few months of the year. "January and February are very slow months," said Kay Owens, president of the Mountain Home Food Basket. Before the holidays, Food Basket buyer Debbie Madgiak said the pantry was doing fairly well but needed bread, cereal, saltine crackers, pasta sauce, dried beans and hot dogs. Usually donations dwindle around the first of the year as people start conserving themselves, but the need for food typically increases, volunteers said. "We're getting more and more people in because of the economy and losing jobs," Owens said. During the winter months, they also help people who are employed by construction work, she said.