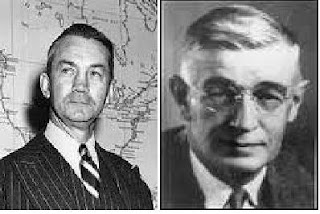 In one of the best articles on the post WWII UFO coverup, Australian writer Tony Brunt delivers the goods in “Price of Deceit“. Brunt writes, “for those on the inside of the cover-up, with exposure to the shocking reality of alien cadavers and incomprehensi- ble space-age componentry, the effect may well have been profoundly disorienting.” The new Secretary of Defense James Forrestal and military science and technology chief Vannevar Bush were confronted with a novel crisis. Forrestal, a 55 years old investment banker, “…two weeks after the [Roswell] crash recovery…’with the pending approval of James Forrestal as new Secretary of Defense, it is certain that he will be briefed on certain aspects of the recovery.’ Forrestal took office on 17 September and within a week had well and truly entered the twilight zone“

The Aztec, NM crash followed in March, 1948. On July 7, 1948, there was another UFO recovery just across the border from Laredo, TX. The US Military bluffed Mexico that it was a rocket gone off course that crashed in Nueva Leon, Mexico. By 1948, Forrestal’s house butler noticed the Secretary would peek from behind the curtains, whenever the doorbell rang. Forrestal was convinced he was followed and his phone tapped.

Forrestal’s mental state reached the top of Washington gossip list, and with Truman’s election victory in 1948, he was eased out. The breaking point was, after farewell speeches on March 29th, Air Force Secretary Stuart Symington requested to ride back to the Pentagon with the departing Defense Secretary, because, he needed to discuss a matter. Afterwards, Forrestal was seen at the Pentagon staring at walls, and by nightfall, speaking of suicide. In just a few days, Forrestal was admitted to Bethesda Hospital, and seven weeks later, “commited suicide” by jumping from the 16th floor. Forrestal’s suicide remains, perhaps, the most suspicious in US history.

Vannevar Bush also suffered symptoms, thinking he had a brain tumor or Parkinson’s disease. In an attempt to regain his mental health Bush went on a camping trip with friends, who found him staring at the fire like the doomed Forrestal. Bush had a better home life, Brunt relates, but the fate of Forrestal, may have proved a greater motivation to get a grip on himself?

Brunt writes about Forrest and Bush in the second section, “The Strain Starts to Show,” of Part Two in a series. The first secton is just as compelling with conclusion provided by Sergei Korolev, a top Soviet engineer to Joseph Stalin, when asked to review UFO documents by the Premier. It’s a must read for anyone who wants a clear history of a pivotal post-WWII period.