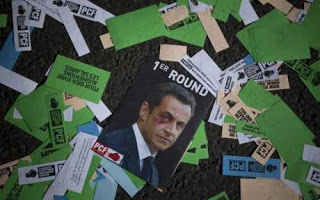 from telegraph: President Nicolas Sarkozy on Tuesday scrapped the country's proposed carbon tax and reshuffled his cabinet in populist tilt after suffering a crushing electoral defeat over the weekend, when his Gaulliste UMP party lost every region other than in its bastion of Alsace and the Indian Ocean island of Reunion.

The vote saw a resurrection of both the Socialist Party and the far-Right National Front, showing how the delayed effects of rising unemployment can change the political landscape long after recession has passed. The jobless rate has risen to 10.1pc, up from 8.7pc a year ago. A quarter of those aged under 25 are out of work.

The government said its energy tax was being postponed indefinitely in order not to "damage the competitiveness of French companies", fearing that it would be too risky for France to go it alone without the rest of the EU. Brussels has announced plans for an EU-wide tax, but the initiative already looks doomed.

Chantal Jouanno, the environment secretary, said she was "devastated that eco-scepticism had prevailed". France's leading green groups wrote a joint letter to Mr Sarkozy saying they were "scandalised" by his decision, accusing him of tearing up a pledge to put climate change at the centre of his presidency.