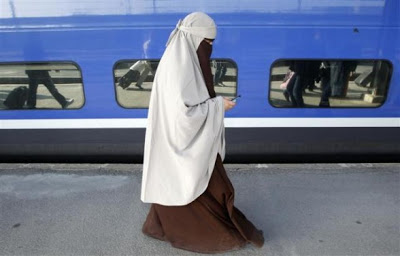 from faithworld: France’s ban on full face veils, a first in Europe, went into force on Monday, making anyone wearing the Muslim niqab or burqa in public liable to a fine of 150 euros or lessons in French citizenship.

Mainstream Muslim groups, which had a six-month grace period after the law was passed to explain it to their supporters, opted not to protest at its entry into force. “We’ve already had our debate about the law and now our position is clear: we respect French law 100 percent,” said a spokesman for the French Council of the Muslim Faith.

Police said they had detained five people, two men and three women, at the small protest in front of Notre Dame Cathedral. The protestors were held for identity checks because their demonstration had not been authorised, not because they were wearing forbidden clothing, a policeman told Reuters.

“It’s so stupid what they’ve done with this law, because now people will wear the (full-face veil) not out of faith but because they are looking for a confrontation,” said Hager Amer, a 27-year-old Muslim woman.

France’s five-million-strong Muslim minority is Western Europe’s largest, but fewer than 2,000 women are believed actually to wear a full face veil. Many still oppose the law, however, on the grounds of the precedent it sets.