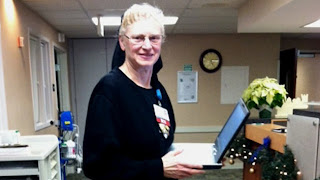 from news.yahoo.com: An Indiana hospital has fired eight employees, including at least three veteran nurses, after they refused mandatory flu shots, stirring up controversy over which should come first: employee rights or patient safety. The hospital imposed mandatory vaccines, responding to rising concerns about the spread of influenza.

Ethel Hoover wore all black on her last day of work as a nurse in the critical care unit at Indiana University Health Goshen Hospital. She said she was in "mourning" because she would have been at the hospital 22 years in February, and she's only called out of work four or five times in her whole career , she said.

"This is my body. I have a right to refuse the flu vaccine," Hoover, 61, told ABCNews.com. "For 21 years, I have religiously not taken the flu vaccine, and now you're telling me that I believe in it."

More than 15,100 flu cases have been reported to the Centers for Disease Control and Prevention since Sept. 30, including 16 pediatric deaths. Indiana's flu activity level is considered high, according to the CDC, which last month announced that the flu season came a month earlier than usual.

When Hoover first heard about the mandate, she said she didn't realize officials would take it so seriously. She said she filed two medical exemptions, a religious exemption and two appeals, but they were all denied. The Dec. 15 flu shot deadline came and went. Hoover's last day of employment was Dec. 21.

Fellow nurse Kacy Davis said she and her colleagues were "horrified" over Hoover's firing, calling her their "go-to" nurse and a "preceptor."

"It was a good place to work," Hoover said. "We've worked together all these years. We're like a family."  The CDC recommends flu shots for everyone older than six months of age.