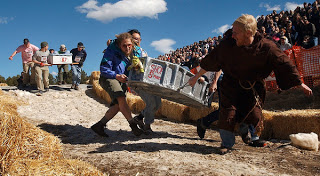 from nytimes.com: It was probably not, in the end, an idea with huge franchise potential or a killer smartphone app in its future. After all, a gleefully macabre weekend celebration built around a frozen corpse - complete with coffin races, tours of the shed where the body is kept on ice and, of course, lots of beer - just might not be as fun beyond the skewed sensibility of Colorado’s hippie-tinged mountain belt.

But now it’s official: Frozen Dead Guy Days are staying put in the small town of Nederland, about an hour northwest of Denver, as are the mortal remains of one Bredo Morstoel, a Norwegian man whose strange and unlikely saga in death — and long-term storage — inspired the whole thing.

The Nederland Area Chamber of Commerce put the rights to the festival up for sale last June, saying it could no longer manage Frozen Dead Guy Days, which had grown rapidly through 10 years of icy, late-winter mayhem and was attracting upward of 20,000 revelers over the course of a weekend in a community of about 1,500.

A former event manager at the chamber, Amanda MacDonald, 39, bought the rights and said in an interview that she planned to keep things mostly the way they were, if not quite frozen in place.