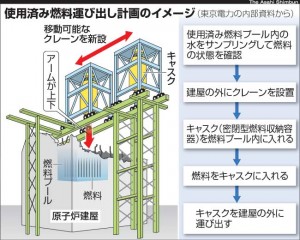 from FukushimaUpdate.com: Preparations to begin the potentially catastrophic decommissioning of the crippled Reactor 4 at the Fukushima nuclear power plant will begin this week with a test run.

The test, which could push back the beginning stages of fuel rod removal by two weeks, includes moving a "protective fuel cask" into and out of the No. 4 storage pool with a crane—before attempts are made to move the spent fuel rods, the Japan Times reports.

Japan's Nuclear Regulation Authority gave the final go-ahead last week for TEPCO to begin the decommissioning process, the entirety of which watchdogs say could take decades.

The most dangerous step in the process will include the removal of the 1300 "bent, damaged and embrittled" spent fuel rods from the unstable Unit 4 pool. The fuel rod removal, which has never been done before on this scale, could take up to one year, and has been described by anti-nuclear expert and activist Harvey Wasserman as "humankind’s most dangerous moment since the Cuban Missile Crisis."

While the fuel removal at reactor 4 presents possible dangers, there is also urgency to complete the task. Natural disasters such as earthquakes remain a major threat to the stability the damaged building, and should it be damaged further before it is decommissioned, there could be a global catastrophe, many experts have warned.

This week's practice run comes per the request of the Japan Nuclear Energy Safety Organization, a government-affiliated nuclear safety agency.

According to Japan Daily, the agency also urged plant operator TEPCO to have the test evaluated by a group of Japanese and overseas experts recommended by the International Research Institute for Nuclear Decommissioning, "a Tokyo-based organization founded by Japanese government agencies, nuclear facility manufacturers and electric power companies."

However, pressure has been mounting on the Japanese Government and TEPCO to allow an international task force made up of nuclear experts, who are independent of the nuclear power industry, to monitor and assist throughout the entirety of the highly hazardous decommissioning process.

This coming Thursday, Moveon.org and affiliated organizations are presenting a petition of over 150,000 signatures to UN Secretary-General Ban Ki-Moon and Barack Obama, asking for global intervention at Fukushima. The campaign, organized by Wasserman, argues TEPCO does not have the capability to safely go it alone.