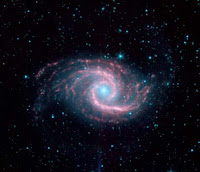 Dr Paul Laviolette made several predictions in his PHD dissertation in the early eighties, Prediction No. 4 about interstellar dust confirmed by data from Ulysses spacecraft in 1993. Laviolette predictions and subsequent verification, can be read here. Prediction No. 1 is the most fascinating and alarming, which ties in myths and geological findings. The prediction states: "... galactic core explosions recur about every 10,000 years and last for several hundred to a few thousand years. He was the first to suggest such a short recurrence time for galactic core explosions and that our own Galactic core undergoes Seyfert-like [Seyfert Galaxy pictured] explosions with similar frequency." An appearance of a Blue Star as in Hopi Indian legend, according to LaViolette, marks the event - our galaxy core exploding - sending a volley of cosmic rays towards Earth. The Blue Star (activated core) can remain visible up to thousands of years. The sky becomes obscured by interstellar dust that drifts in from disruption of the heliosheath to provide appearance of an ominous eye.  An excellent presentation of Superwave Theory can be viewed on You Tube, "Earth Under Fire." It's an amazing theory presented in thought-provoking manner - a must see!