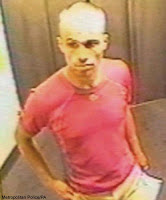 Trowbridge H Ford writes in, "Gareth Williams And Gudrun Loftus Murdered To Avoid Their Becoming More George Blakes", an interesting tale about international spying. Gareth Williams and Gudrun Loftus were apparently working together to expose unflattering activities of the British and German governments. Williams, a British Government Communications Headquarters (GCHQ) employee, who worked with MI6 and the NSA, and Loftus, an Oxford University lecturer, paid for their efforts with their lives.

Trowbridge's analysis is worth reading to explore alternative views of current events. Williams, in the picture at left, appears sick. Trowbridge believes Williams was the victim of poisonous mushrooms. It's concluded by Trowbridge, both, knew too much and could embarass the British government, leaving only murder as an alternative to reign in the spys! Williams also crosses paths with the Russian spy Anna Chapman. Trowbridge enlightens how perpetrators may link up behind the scenes. It's an interesting read and some of the damaging evidence secreted by Williams and Loftus was turned over to Wikileaks!