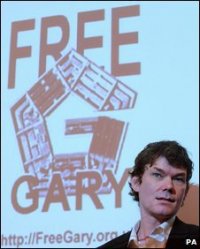 Gary McKinnon, a cyber-cult hero, who hacked into Pentagon computers years ago, is nearing the end of his appeals to prevent his extradition from the UK.  The US military wants to make McKinnon an "anti-hacking poster boy" as Gary summarizes it.  "Every one of us has, at one time or another, fantasized about staying up all night, smoking weed and hacking into top-secret U.S. government computers," as Geoffrey Wansell writes in a recent Our Strange World article, "The UFO Hacker's Last Stand". You have to like the style.  McKinnon is, perhaps, even an anti-hero raging against the system.  The UFO hacker's extradition, at last check, is on hold due to a review of McKinnon's medical condition, Asperger's syndrome. What did he see:  lists of non-terrestrial ships and crew members, also, material on free energy. Let Gary tell you in his own words in a very cogent interview on hacking into Pentagon computers. McKinnon makes it sound easy just a software package such as Remotely Anywhere and a Perl script pasted into a hacking program to search for default passwords. Gary did this on a 28K modem connection!  Wow!  A person wonders what will ever come of this case since McKinnon's rearrest in 2005? There are efforts to defeat the extradition in the UK, one website is www.freegary.org.uk. A timeline of the UFO Hacker's saga is available here.