from guardian: The US vice-president arrived in Tbilisi today, in a show of political backing for the nation and its pro-Western Georgian president. Dick Cheney's visit comes a day after the White House announced a $1bn (£500m) economic aid package for the country, which was ravaged by last month's war with Russia. The trip and his meetings with President Mikhail Saakashvili today have raised speculation that a US military aid package might be announced soon. Georgia has been a significant troop contributor to US operations in Iraq. Cheney arrived after a trip to neighbouring Azerbaijan, where he said the US had a "deep and abiding interest" in the region's stability. 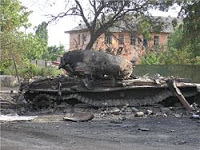 deluded saakashvili expected US & israel to act as knights in shining armor
from kurt nimmo: According to UPI editor at large, Arnaud de Borchgrave, Georgia miscalculated in its attack on South Ossetia — and bad. “NATO guarantees that an attack against one member country is an attack against all are no longer what they used to be. Had Georgia been inside NATO, a number of European countries would no longer be willing to consider it an attack against their own soil,” writes de Borchgrave. In other words, a lot of people in Europe see the insanity of going up against Russia with its nukes only minutes away from Brussels, Paris, Berlin, etc. Georgia, with its tie-eating leader and deranged ethnic nationalism, simply was not worth it.

from ria novosti: Georgia is mobilizing commando units near its border with South Ossetia, a senior Russian military official said on Tuesday. Russia officially recognized South Ossetia and Abkhazia as independent states on August 26, saying the move was needed to protect the regions after Georgia's August 8 attack on South Ossetia. 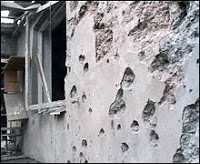 from russia today: The Georgian government has admitted dropping cluster bombs in its military offensive to regain control of South Ossetia, reports Human Rights Watch. The international organisation says it has received an official letter form Georgia’s Defence Ministry that acknowledges the use of the M85 cluster munition near the Roki tunnel linking South Ossetia with Russia. The M85 is the same weapon that was used extensively by Israel in its 2006 war with Hezbollah in Lebanon. Human Rights Watch has also said that Russia used the widely condemned weapons in several places during the conflict. Moscow has rejected the accusations.

russia: US delivered weapons to georgia under cover of aid
from ap: Russia warned the West on Monday against supporting Georgia’s leadership, suggesting that the United States carried weapons as well as aid to the ex-Soviet republic and calling for an arms embargo until the Georgian government falls. The remarks by Foreign Minister Sergey Lavrov and his spokesman came as European Union leaders delicately approached their relations with Russia, weighing how to punish Moscow for its invasion of Georgia without isolating the continent’s major energy supplier.

russia ‘could destroy nato ships in black sea within 20 minutes'

from winter patriot: The owner of a dissident Russian website has been shot dead after being detained by the police. Magomed Yevloyev was apparently shot in the temple while in police custody, in what the police are calling an accident. Yevloyev's website, ingushetiya.ru, was very critical of the Kremlin. The government had made repeated attempts to shut it down. If at first you don't succeed ... There's much more to this story; if you're interested in more details, here and here are good places to start.

from press tv: A Palestinian has been critically wounded after Israeli troops shot him in the face in an overnight raid in the West Bank village of Ni'lin. The military forces attacked the village where there has been a weekly demonstration against Israel's controversial separation barrier. During the operation, 40-year-old Awad Srur was shot with four rubber-coated bullets, three of which struck him in the face, according to doctors treating him at a hospital in the nearby town of Ramallah.

from people's voice: Four decades ago, Israel banned The Beatles fearing their revolutionary message of love and peace would corrupt their youth. On September 25, 2008, Sir Paul McCartney will perform his 'Friendship First' concert in Tel Aviv for $4.3 million and is being promoted as one of "music's most revered stars" and a holder of "the key principals of friendship – loyalty and respect." As I wondered what Lennon might have said to his old mate in regards to making money from an apartheid state, I reminisced to REVOLUTION.

poll: 55% of americans support israeli strike on iran
from thinkprogress: A recent poll released by the Israel Project claims that 55 percent of Americans would approve of the “United States and its allies making targeted conventional military strikes against Iran’s nuclear weapons facilities.” That number rises to 63 percent if economic and diplomatic sanctions fail and Iran acquires nuclear capability. The Israel Project released the findings at a press conference this week with pollster Frank Luntz, who suggested that the reason for the high numbers was simply that “Iran scares people.” Still, there was a great deal of support for diplomacy, “with 62 percent saying an ‘opportunity for a diplomatic solution still exists.’”

israel: when we say attack, we mean it
from press tv: Israeli Defense Minister Ehud Barak says Israel is determined to use 'any option' to stop Iran's nuclear program should sanctions fail... "The time is still for diplomacy and sanctions, but much more effective sanctions. We keep saying that we do not remove any option from the table. I propose to others not to remove any option from the table as well. But when we say it, we mean it," Barak said.

US led forces kill pakistani women & children
from ap: At least 15 people, including women and children, were killed in an attack involving U.S.-led forces in a remote Pakistani village near the border with Afghanistan, intelligence officials and a witness said Wednesday. The U.S.-led coalition in Afghanistan said it had no report of such an incursion, said to have happened in the militant-infested South Waziristan tribal region. Pakistan’s army confirmed an attack but did not specify if it believed foreign troops were involved.

dutch newspaper: US attack on iran imminent
from infowars: Holland’s largest newspaper, Telegraaf, reports that a decision has been made by the United States to attack Iran in the next few weeks. Targets include both nuclear facilities and military installations, according to the newspaper. UAVs will be used in the attack. The Dutch secret service, the AIVD (Algemene Inlichtingen- en Veiligheidsdienst), has allegedly helped with target mapping. Telegraaf claims the AIVD has collaborated with the U.S. in sabotaging the Iranian weapons industry. Deemed “successful,” these operations were recently halted because of the U.S. plan for airstrikes. AIVD information over the last few years has been shared with the CIA.

from ap: Thailand's embattled leader struggled to keep the peace and his grip on power Tuesday after declaring a state of emergency that was openly flouted by thousands of anti-government protesters in the capital. While Prime Minister Samak Sundaravej sought to tamp down newly violent unrest pitting pro- and anti-government protesters, he also was hit by an electoral commission finding that could disband his party and bar him from politics.

from time: Over one million people are still stranded in the impoverished eastern state of Bihar in the area's worst floods in over 50 years.

quake brings grim repetition to china
from washington post: It was a familiar scene: Rescue teams headed into an earthquake zone Sunday to help tens of thousands of frightened farmers deal with hundreds of aftershocks and a shortage of tents. Less than a week after the close of the Olympic Games, which brought mostly good news to China's government, officials struggled with the aftermath of a 6.1-magnitude earthquake that killed at least 32 people and injured hundreds Saturday.

japanese prime minister resigns
from time: Japan's unpopular prime minister, Yasuo Fukuda, announced his resignation Monday after less than a year in office. Fukuda, in a hastily arranged news conference Monday evening, said he was stepping down to avoid a "political vacuum" at the head of the world's second-largest economy. "My decision is based on what I thought the future political situation ought to be," Fukuda said 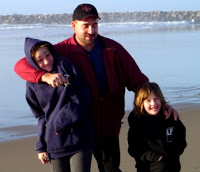 from oregonian: Mexican prosecutors are taking the unusual step of jailing six policemen from the resort town of San Jose del Cabo for what they say could be 30 days or more while they investigate how and whether a vacationing Oregonian was beaten to death in officers' custody, according to U.S. officials. Steve Royster, spokesman for the U.S. State Department's Bureau of Consular Affairs, said Tuesday that last week's death of 38-year-old Sam Botner of Yoncalla was "a grave concern." The State Department is monitoring Mexico's investigation, he said.

mexican drug wars threaten US
from washington times: An escalating turf fight between warring drug cartels in Mexico is spreading into the United States with federal officials warning that deadly shootouts and ambushes along the southwestern border pose a serious threat to both U.S. law enforcement and American citizens, according to a confidential multi-agency government report. The Aug. 29 report predicts a rise in the use of "deadly force" against U.S. police officials, first responders and residents along the border, and further spillage of drug-gang violence deeper into the United States. Written by the Arizona Counter Terrorism Information Center (AcTIC) and the High-Intensity Drug Trafficking Area (HIDTA) Investigative Support Center, the report also said the drug cartels are expected to hire members of deadly street gangs now in this country, including Mara Salvatrucha (MS-13), to "carry out acts of violence against cartel members in the U.S." "U.S. law enforcement and first responders need to maintain a heightened awareness at all times," the report said.

almost 1,000 deaths this year in mexico border city
from afp: Mexicans plan mass protests against insecurity on Saturday, but not in the city with the highest murder rate this year, where many are focused on more immediate safety concerns. Violence has escalated throughout Mexico since President Felipe Calderon, who took office at the end of 2006, launched a military crackdown on drug trafficking, but nowhere more than in Ciudad Juarez.

update: ecuador giving US air base the boot

from washington post: When U.S. officers stationed in this humid coastal city give reasons they should continue their decade-old airborne surveillance mission, they talk not only about fighting drug runners on the open seas but about the $71 million they've spent to renovate and maintain the city's airport, and the $6.5 million they inject each year into the local economy. But the government of Ecuador has decided, and Washington has apparently agreed, that one of the most important foreign outposts in the United States' war on drugs will close. The 450 U.S. Air Force personnel and contractors stationed at a military base that shares the airport's runway will be leaving next year.