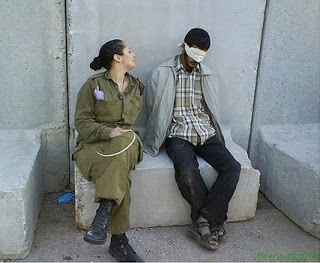 drills, bolton, harvard - putting pieces together
from of goats & men: We mentioned in the blog earlier how John Bolton thinks an Iran attack must proceed within days if it is to occur at all. Terror drills and military exercises have begun in Korea. Harvard has divested itself from Israeli investments which one could speculate has to do with fear of war in the Middle East. Gold is on the rise. None of this definitely means war is coming, but it certainly suggests it could very well be.

from danger room: Posing and smiling with blindfolded Palestinian prisoners — and then posting the pics to Facebook? What’s the big deal, an Israeli reserve officer asks. “There’s no violence or intention to humiliate anyone in the pictures,” Eden Abergil tells Army Radio. “I know I didn’t do anything wrong,” she said. Nonetheless, the photos, taken during Abergil’s active duty and part of a gallery labeled “IDF – the best time of my life,” have drawn condemnation from Israeli and Palestinian officials alike. In a YouTube clip, IDF spokesman Captain Barak Raz calls Abergil’s photos “repulsive” and “shameful.” Palestinian Authority spokesman Ghassan Khatib calls them “an example of life under occupation.”

real war against 'terrorists' not in afghanistan -
but in pakistan, yemen & somalia
from allgov: While much of the public attention continues to focus on Afghanistan, the U.S. has been quietly ramping up its attacks on al-Qaeda in Yemen, one of the many countries into which the war on terror has expanded under President Barack Obama. According to The New York Times, the American military has carried out at least four covert strikes in Yemen since December. Some have had mixed results. An attack in late May killed not only a group of al-Qaeda operatives, but also a Yemeni deputy governor who was trying to talk local terrorists into quitting their fight... President Obama also has approved an expansion of CIA drone missile attacks in Pakistan, as well as raids against terrorists in Somalia. Because these are not officially military operations, there is some concern that if the Americans involved are captured, they will not have the protection of the Geneva Conventions.

61 truck-loads w/ 300 tons of explosives go missing in india
from xinhua: Some 61 trucks loaded with over 300 tons of explosives have gone missing in the central Indian state of Madhya Pradesh, a senior police official said Friday. "The trucks were sent from a state-owned factory, Rajasthan Explosives and Chemicals Limited, in Dholpur to a private company called Ganesh Explosives in the state's Sagar district. But it never reached there," the official said. A massive search is on to track down the trucks as fear is mounting that if the explosives, including detonators and gelatin sticks, reach the wrong hands it could be devastating, he added. Meanwhile, Rajasthan Explosives and Chemicals Limited has claimed that it can't be blamed for this disappearance as it sent explosives only in trucks authorized by the company. "We hand over the explosives to those who have the license. And they then dispatch it on their truck. Now, whatever happens to that explosive thereafter, we are not responsible for that," Y.C. Upadhyay of the company said.

oh, but apparently - much like the gulf oil spill is over -
the war in iraq is done ... nothing to see here, move along