(this truly breaks my heart. i’ve been a huge fan of george for many years, own all of his records & will frequently quote him at length. his work has truly affected my life for the better. i put him up there with morrissey & bill hicks. i will miss him dearly.) 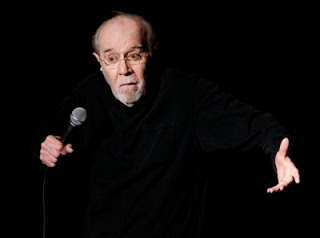 from ap: George Carlin, the frenzied performer whose routine “Seven Words You Can Never Say On Television” led to a key Supreme Court ruling on obscenity, has died.

Carlin, who had a history of heart trouble, went into St. John’s Health Center in Santa Monica on Sunday afternoon complaining of chest pain and died later that evening, said his publicist, Jeff Abraham. He had performed as recently as last weekend at the Orleans Casino and Hotel in Las Vegas. He was 71.

“He was a genius and I will miss him dearly,” Jack Burns, who was the other half of a comedy duo with Carlin in the early 1960s, told The Associated Press.