george van tassel and the integratron 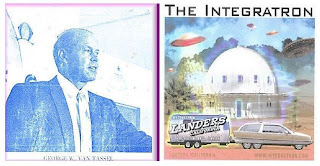 The UFO conventions in Roswell, NM are popular and well-known, but few know about the  UFO Spacecraft Conventions held at Giant Rock in CA. George Van Tassel , a contactee, hosted conventions there from the 50s through mid-70s. In 1959, ten thousand UFO enthusiasts braved desert heat to attend, which seems remarkable today.

An article by Kathy Doore at labyrinthina.com provides insight into Van Tassel’s contacts. “On August 21, 1953, a ship from Venus landed and a man wearing a jumpsuit stood at the foot of his sleeping bag, announcing I am Solganda, and I would be pleased to show you my craft…He [Van Tassel] was taken on a tour of the ship and told that he had been chosen to bring a message of peace and interplanetary brotherhood to his fellow earthlings. He was shown the principals of cell rejuvenation which later led to the creation of The Integratron.” Van Tassel wrote “I Rode a Flying Saucer“ (pdf download) as a result of his experiences.

The very existence of The Integratron and Giant Rock Airport , located in the Mojave Desert near Landers, CA, depend upon a chance encounter of an eccentric “prospector”, Frank Critzer, who sought car repair at the garage of Van Tassel’s uncle circa 1930 in Santa Monica. George and his Uncle impressed by Critzer’s intelligence “grubstaked” the would-be prospector with money and a trunk full of canned goods with the promise of a share of future claims.

“The prospector” ventured to Giant Rock and carved out 400 square ft of living space beneath it and graded a runway. Critzer, an enigma and suspected Nazi sympathizer, met a violent end in 1942, when – as legend has it – law enforcement threw a tear gas canister into the dwelling space and set off a cache of dynamite! Van Tassel later rented the area from the government, in the late forties, opening a restaurant and reopening the airport. Van Tassel, who worked for Lockheed, Douglas and Hughes Aircraft in the thirties and forties, along with the curious Critzer seem characters worthy of further examination. Is it perhaps a psyop?

There is a rare interview circa 1964 of Van Tassel on You Tube. UFO researcher Greg Bishop interviews Barbara Harris on Radio Misterioso, who chronicled local history of Giant Rock and the Integratron. Bishop has also written about the Giant Rock Spacecraft Conventions here. Giant Rock proves as fascinating as Roswell with many stories in its past.