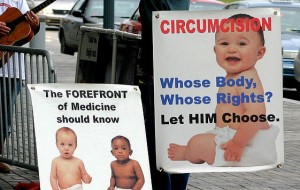 from The Algemeiner: The district court of Cologne ruled this week that religious circumcision of a child is harmful and that a parent’s jurisdiction over his child does not extend to the practice of circumcision. Recent years have seen the legality of circumcision called into question, with lobbying wars ensuing between the practice’s proponents and detractors. Jews and Muslims, who consider circumcision an integral part of religion, have fought the increasing onslaught of anti-circumcision activists, who call the religious practice genital mutilation and immoral. The Cologne ruling, which outlaws circumcision practiced for religious reasons, is a notable beachhead for the anti-circumcision camp. The ruling was sparked by a Muslim doctor’s botched circumcision of a four-year-old boy, who was brought to the emergency room days later, leading the authorities to press charges on the legality of the procedure. The doctor who performed the circumcision was subsequently acquitted because he had acted with the parents’ consent.