gilgamesh & the search for the ‘landing place’, part1 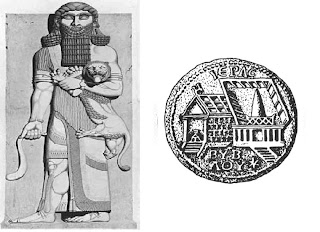 Who needs a television action hero when the Epic of Gilgamesh supplies the real thing? Gilgamesh, the fifth king of Uruk, a Sumerian city-state circa 2500 BC, fulfills any reader's need for epic adventure. The Sumerian King is viewed a demi-god (half human) but considered two-thirds divine by benefit of his mother, an Annunaki princess, Ninsun. In spite of a youthful age, Gilgamesh grew anxious about a human fate and sought immortality. A demi-god known for his prowess, Gilgamesh is provided with a companion, Enkidu, to occupy his boundless energies. The Sumerian King had taken to conjugal visits in newlyweds' homes, insisting on taking the spouse before the husband could consummate the union. This impropriety provoked an outcry from inhabitants and Enkidu was the gods' solution. They become close after initial conflict, when Gilgamesh realizes this is the friend Ninsun had foretold he would meet. Enkidu translated means "creature of Enki" and viewed as an android by Zecharia Sitchin in his book, Stairway to Heaven". It is Enkidu who revealed to Gilgamesh the location of the landing place of the gods in the Cedar Mountains, where the demi-god might outsmart his fate. Sitchin knew the only cedar trees in the entire Middle East are in Lebanon, concluding Baalbek is the Landing Place, pictured on a Phoenician coin above.

On tablet three of 12 clay tablets from Ashurbanipal's library in Nineveh dating to the 7th century BC, Ninsun seeks the support of Shamash for her son's and Enkidu's adventure. The pair travel a great distance west and arrive at the cedar forest, then lie down for the night. Gilgamesh is awakened by what must be a rocket launch and later describes: "The vision that I saw was wholly awesome! The heavens shrieked, the earth boomed! Though daylight was dawning, darkness came. Lightning flashed, a flame shot up. The clouds swelled, it rained death! Then the glow vanished; the fire went out. And all that had fallen was turned to ashes." The launch confirms to Gilgamesh he has found the Landing Place.

In the morning, they find the gate in the forest Enkidu previously told Gilgamesh about. Enkidu gets thrown and knocked unconscious trying to open the gate, the companion lies paralyzed for 12 days. Gilgamesh locates in the meantime a tunnel, and once Enkidu recovered, they begin to clear trees and rocks from the opening.

The two adventurers just cleared a hole large enough when their presence was discovered. Huwawa (Humbaba) appointed guardian of the forest by Enlil, whose forehead could emanate a radiant beam and destroy trees, bushes or man detected them. The forest's guardian could, according to text, employ seven radiances or cloaks but only one was on when the montrous giant encountered the intruders. Gilgamesh and Enkidu took this as an opportunity to overcome Huwawa, but the monster turned to face them with its killing beam tracing a destructive path from his forehead.

Shamash seeing danger spoke to them from the sky, advising to draw near and raised swirling winds that beat against Huwawa's eyes, neutralizing the beam and soon immobilized him. Enkidu struck Huwawa then to the ground and put him to death. The crash of the monster resounded for two leagues (over ten miles) through the forest. The two stopped to rest by a stream their path no longer blocked.

Gilgamesh was spotted by Ishtar while bathing, who must have been watching like Shamash from above in her craft. The Landing Place also known as the Crossroads of Ishtar as she used it to come and go, enamored by his physical beauty, attempts to entice Gilgamesh into sex. Gilgamesh realizing his inferior position, rebuffs the goddess' overture with the realization, sooner or later, she would rid herself of him like an old shoe and named other parties she had been promiscuous! Ishtar enraged by the refusal, seeks approval from Anu to allow the "Bull of Heaven" to kill Gilgamesh on tablet six.

The Bull of Heaven attacked and the two adventurers flee for their lives back to Uruk, cutting short their attempt to enter the Landing Place. They are aided by Shamash but Anu's mechical monster with two piercing horns, caught up with them on the outskirts of the city. Enkidu left alone to face the monster as Gilgamesh summoned his warriors, falls into a pit created when the Bull of Heaven snorts. The Bull turned away and Enkidu leaped from the pit and put the monster to death. The triumphant pair pay homage to Shamash and rest in the King's palace after an all night celebration.

Ishtar complains to the Supreme Gods, who hear her complaint and consider death for Gilgamesh and Enkidu as they killed both Huwawa and the Bull of Heaven. It seemed a price must be paid. This concludes only the first part of the epic. There is a second search for immortality and adventure where Gilgamesh meets Noah-stay tuned!