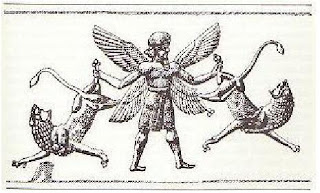 In the Epic of Gilgamesh, part 1, the semi-divine Sumerian King made a hasty retreat from 'The Landing Place' in the Cedar Mountains after Inanna asked Anu to send the Bull of Heaven to smite the King for rebuffing her.The Bull is slain by Enkidu after catching up with Gilgamesh and his android companion, outside of Uruk. At the Abode of the Gods, the Supreme Gods considered Inanna's complaint and deliberated whether the King and his companion should die? Anu communicated to Enlil, his son, both should die because of the loss of  Huwawa and the Bull of Heaven. Enlil felt Gilgamesh should live. Shamash/Utu pointed out Gilgamesh consented to these acts and Enkidu was his innocent companion alongside to aid him. A compromise was reached and punishment meted out for Enkidu, was to serve hard labor in the depth of the mines.

Gilgamesh loathe to part company with Enkidu, had an idea. The Land of the Mines was not far from the Land of the Living, a place where the gods took humans who were granted eternal youth. The elders of Uruk and his mother Ninsun advised Gilgamesh to seek permission from Shamash/Utu for this adventure. Gilgamesh begged Shamash to be allowed the journey to seek life. Shamash doubted the King's worthiness but showed mercy to his tearful pleas and granted permission.

The Supreme Gods decreed Enkidu would be called upon by two winged emissaries and one would transport him to the mines. Gilgamesh warned already by Shamash the path to the Land of the Living would be hard, desolate and the place guarded by fearsome 'Mighty Ones', who could unleash scorching fire and lightning. The Sumerian King sought an easier route by building a boat and enlisted 50 young men to row and set sail for his destination. Enlil then wondered why Enkidu sailed on a royal ship, while his punishment was supposed to be a personal escort to the mines? The wrath of the Gods soon followed.

A fearsome watchman positioned atop a mound, who like Huwawa could emit rays, must have challenged them as Enkidu pleaded with Gilgamesh to turn back. The King directed his royal ship to shore, instead, so he could subdue the adversary - be it man or god. The ship's sail suddenly split and capsized, as if, by an unseen force. All aboard ship drowned, except for Gilgamesh and Enkidu, who were able to swim ashore. They swam back down to the shipwreck to survey an eery scene of the men still at their posts almost alive in appearance. Enkidu succumbed shortly thereafter to weakness and died along the shore. Gilgamesh mourned his friend for seven days, "until a worm fell out of his nose." An aggrieved Gilgamesh wandered aimlessly for a time a deep lament to his departed friend. Gilgamesh confronted by mortality and deterred from his goal again of finding an elusive immortality.

Gilgamesh recovered his resolve to defeat death and journeyed west by following the Sun on unbeaten paths. At one point, as he neared habitation, the King saw lions from a mountain pass. Gilgamesh  prayed in fear, and as he rested had a dream, which he interpreted as encouragement that he would "rejoice in Life." Gilgamesh's epic battle and triumph over the lions has been commemorated throughout the ancient world (pictured).

The next obstacle was a vast lake driven by high winds and surrounded by mountains, Gilgamesh would save much time and effort if he could travel by water. The King directed to a boatman, Urshanabi, who takes him across using poles in just three days. Gilgamesh had arrived at TIL.MUN - "The Land of the Living." Urshanabi instructed Gilgamesh to proceed to a town, Itla, where he would seek the blessing of a local god, Ulluyah, in order to proceed further. Shamash aids the King, once again, with advice to make offerings. Shamash took Gilgamesh before the god seeking the god's acceptance, but another god, Kumarbi objected strongly that immortality could not be granted Gilgamesh.

Gilgamesh realized he would not be granted a Shem (rocket), sought in consolation to see his forefather, Utnapishtim (Noah). The two-thirds divine King proceeded to Mount Mashu, The Place of the Shems:

The name of the Mountain is Mashu.
At the mountain of Mashu he arrived,
Where daily the Shems he watched
As they departed and come in.

Rocket-men guard its gate.
Their terror is awesome, their glance is death.
Their dreaded spotlight sweeps the mountains.

There are depictions of hybrid bull-men with a circular device on a post, which may be the spotlight?. Two guards realized immediately Gilgamesh possessed flesh of gods, when their spotlight only slowed him momentarily. The guards allowed him to approach and asked him to account for his presence in a restricted area. Gilgamesh invoked Shamash and his two-thirds divine origins and asked permission to see Utnapishtim, the guards allowed him to enter.

Gilgamesh, in the dark and possibly blindfolded, followed the Stairway to Heaven, depicted as a ladder with wings, took a day to descend six levels and then ascend six levels. Once, Gilgamesh could see again he found himself in an amazing enclosure, a veritable garden of the Gods. Gilgamesh meets Utnapishtim, finally, and comes to the point: "Tell me, How joinest thou the congregation of the gods in thy quest for Life?"

A hidden secret Utnapishtim (Noah) reveals to Gilgamesh how he was granted everlasting life. A stricken Gilgamesh, once he realizes, only an assembly of gods can grant eternal life, promptly fainted and lay unconscious for six days. Utnapishtim related, perhaps as a consolation prize, how he could postpone death by eating a prickly plant that grows underwater, which the gods ate themselves!

Back with Urshanabi, Gilgamesh trumpets the plant's invigorating properties. Fate intervened between Gilgamesh and a long life once again, however. A snake made off with the plant as Gilgamesh prepared to bath before retiring one night on his return trip. Gilgamesh breaks down to cry, once more, in his failed quest for immortality. The divine Gilgamesh, whose father was human, ruled 126 years. This is how the first search for immortality ended, according to the entry made in the Sumerian Kings Lists.