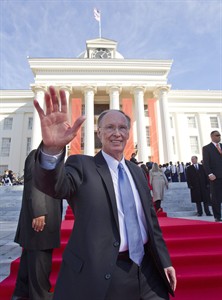 governor quickly apologizes for saying only christians are his brothers

from canadian press: Alabama Gov. Robert Bentley said he was sorry Wednesday for his inauguration day remarks about only Christians being his brothers and sisters and said he would work over the next four years for people of all faiths and colours. Bentley said he didn't mean to insult anyone with comments he made from the pulpit of a church once led by Martin Luther King Jr. He said he was speaking as an evangelical Christian to fellow Baptists... The Republican is a former legislator and Southern Baptist deacon who emerged from the back of a crowded field to win the governor's office. He told the church crowd just moments into his new administration that those who haven't accepted Jesus as their saviour are not his brothers and sisters. "Anybody here today who has not accepted Jesus Christ as their saviour, I'm telling you, you're not my brother and you're not my sister, and I want to be your brother," Bentley said. Some in the crowd at the church said "Amen," but groups representing other faiths in Alabama called the remarks shocking.