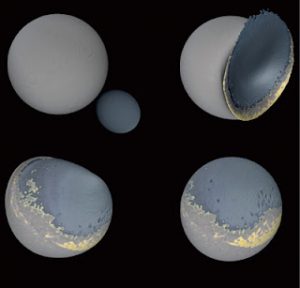 A phys.org article covers new theory that proposes a mystery moon collided with our Moon in distant past to form the highlands on the far side. Grail Mission will provide best mapping of lunar gravity and may shed light on theory by peering into Moon’s interior. “The Moon’s near side, facing us, is dominated by vast smooth ‘seas’ of ancient hardened lava. In contrast, the far side is marked by mountainous highlands. Researchers have long struggled to account for the differences, and the “two moon” theory introduced by Martin Jutzi and Erik Asphaug of the University of California at Santa Cruz is the latest attempt. Scientists agree that when a Mars-sized object crashed into our planet about 4 billion years ago, the resulting debris cloud coalesced to form the Moon. Jutzi and Asphaug posit that the debris cloud actually formed two moons. A second, smaller chunk of debris landed in just the right orbit to lead or follow the bigger Moon around Earth. ‘Normally, such moons accrete into a single body shortly after formation,’ explains [Deputy Principal Investigator David] Smith. ‘But the new theory proposes that the second moon ended up at one of the Lagrange points in the Earth-Moon system.’“

“Lagrange points are a bit like gravitational fly traps. They can hold an object for a long time–but not necessarily forever. The second moon eventually worked its way out and collided with its bigger sister. The collision occurred at such a low velocity that the impact did not form a crater. Instead, the smaller moon ‘went splat,’ forming the contemporary far side highlands. In short, the lunar highlands are the lost moon’s remains,” reports article. It’s interesting but remains theory! The key lesson is striking difference between near and far sides of Moon in their topography!