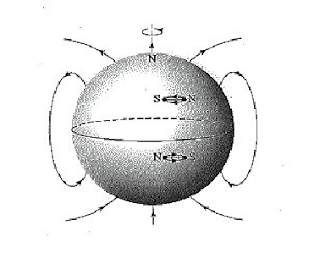 "About every 11 years the magnetic field on the sun reverses completely – the north magnetic pole switches to south, and vice versa. This flip coincides with the greatest solar activity seen on the sun in any given cycle, known as 'solar maximum,'" begins article, "'The Great Switch' -- Magnetic Field Does a Complete Reverse Every 11 Years," via The Daily Galaxy. Two scientific papers are sources for article as scientists grapple to get a better understanding of underlying process in pole reversal. The article observes, "currently the polarity at the north of the sun appears to have decreased close to zero – that is, it seems to be well into its polar flip from magnetic north to south -- but the polarity at the south is only just beginning to decrease," and presently, scientists don't understand why? There are many models that attempt to account for reversal but appears not one fully explains asymmetrical changes exhibited currently by the Sun? Another interesting observation made, in article, "Scientists will also keep their eye on the current cycle – numbered Solar Cycle 24 – because a polar switch at the north that is sooner than was expected also implies this may be a fairly small cycle in terms of the number of sunspots and amount of solar activity." An impression remains the Sun possesses uneven qualities still unknown. However, it's the unknown that makes scientific endeavor interesting!