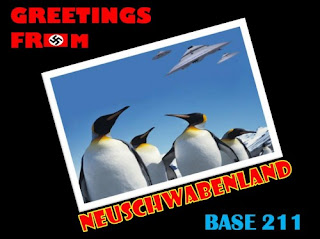 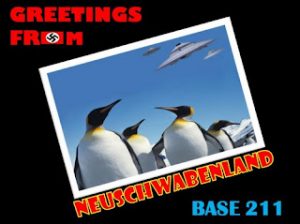 Clyde Lewis interviewed Henry Stevens, a veteran researcher of Nazi technology, on Ground Zero Live, last night. Lewis provides overview of show in article, "Greetings From Neuschwabenland Base 211," a trail of Nazis and technology secreted from Third Reich to South America and Antarctica. The show host and guest made a nice contrast with Lewis, a true believer in occult background of Nazi movement, and Stevens, who won't buy anything he can't see or touch! Stevens still impresses with an encyclopedic treatment of V-1, V-2, foo fighters, Nazi Saucers, the Bell and secret bases in Greenland, Canada and Base 211 in Antarctica. You may read an earlier Stevens book "Hitler's Flying Saucers," with link to free .pdf file. Lewis and Stevens covered much of author's more recent work in "Hitler's Suppressed and Still-Secret Weapons, Science and Technology." Stevens relates many anecdotal stories and what's better than a good story? Fantastisch!