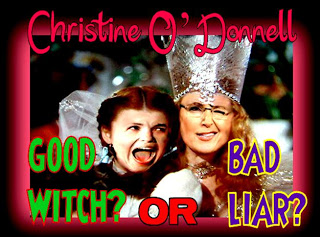 from clyde lewis: Once in lifetime not too far away, I dabbled in evangelical Christianity. It was something I did because my original religious group abandoned me because I was a sinner and at the time played the stupid game of sinner, to saint much to my discouragement. Attending Pentecostal services was more entertaining than spiritual and I really didn’t question the sincerity of those attending. They believed in the power of God and the salvation of Christ... I am particularly concerned with this whole affair with Delaware Senate nominee Christine O’Donnell. Once again we have a born again Christian who pulls a Mike Warnke by saying to Bill Maher on his TV show in 1999, that she once dabbled in witchcraft. She made mention of this around the time “The Blair Witch Project” was in theaters.