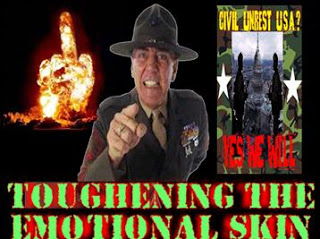 from clyde lewis: In the December 2005 issue of the Idaho Observer, “The Harm Principle” by Clyde Lewis was published. It was a comprehensive look into “The Model State Emergency Health Powers Act.” This act was first issued after the anthrax attacks on the United States outlining what powers the government would be allowed to have in the wake of a Bio attack. The powers would include; search and seizure, forced medical treatments and inoculations and mass detainment if necessary to contain a contagion.

On February 23rd 2009 The Ground Zero Lounge sent out the warning that the next terror attack would be a bio terror attack using food sources. The show entitled MK AGRIKULTRA the CONTAMINATIONAL CRISIS warned of how a long term terrorist attack such as food or water contamination could cause a panic and create a lack of confidence amongst the citizenry.

On April 27th, 2009 The Ground Zero Lounge discussed Barack Obama’s 100 days in office and the new crisis that is looming over his presidency. The show, entitled “Toughening up the Emotional Skin” demonstrates that many of these crises that we are facing in America were already predicted by FEMA, Department of Homeland Security and the Centers for disease control. This episode will make you wonder if “something wicked this way comes” and whether or not we are emotionally capable of dealing with the threat of becoming an undeveloped country, diseased, bankrupt, and turbulent.