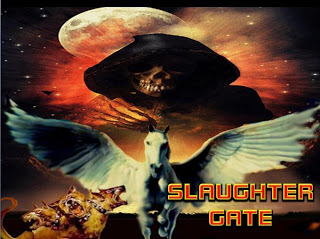 from clyde lewis: It is always difficult to end a Ground Zero radio show with unfinished business. That is exactly what happened when I tried to explain the fictitious predictive programming piece called “Black Jack.” While most of what I talked about sparked a flood of calls there was one e-mail I received that I couldn’t quite figure out.

The e-mail spoke of Pegasus the white horse and Cerberus the three headed dog who stands guard at the gates of hell. I read it on the air to see if anyone saw the significance. I said to everyone that I should get home to find out what this e-mail was about.

The e-mail was titled, “White Vans. Pale Horse, Pegasus. Black Jackal, Cerberus.” It talked about a website that explained that there is some sick symbolism being used to suggest that the BP oils ill disaster was a false flag attack on the United States. There was a link to this headline: “Cerberus: Guarding the Gates of Hell – DynCorp, Pegasus, BP, Goldman Sachs – Gulf Oil Disaster Planned.”

Coincidentally this e-mail came to me while I was talking about the Denver airport and the arrival of a seven ton statue of Anubis, the Egyptian God of death that now stands guard over the controversial airport.

previous episode: project blackjack,
a push from an invisible hand