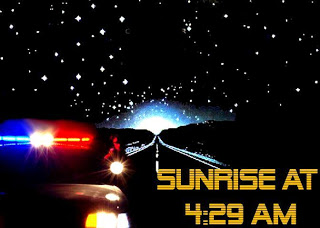 ground zero: sunrise at 4:29am

from clyde lewis: While the stock market took a huge dip & immigration debates generate a xenophobic attitude about earthly aliens; there are several other than earthly alien stories that have been in the news & while oil rig disasters & terrorism false flag events take center stage, there are other rings in this circus & in one of them is the “information creep” about an extra-terrestrial presence in space & on earth.

As we see the first attempts at “disclosure” there are people are looking for, and expecting, the wrong answers, when the correct, but far less glorious, fulfilling, and even mundane answers may well be right under our noses.

Most of the information about UFOS and aliens will most assuredly not be what the New Age alien cultists are expecting because many have put faith in their discoveries and made them spiritual and faith-based, sometimes bordering on, or fully, a delusional response to the phenomenon.

When our government or the world governments bring forth information on Aliens or UFO’s it will be on their terms. Any information will be permitted and most certainly will not appease the majority of those that have put their time and money into theories of known unknowns. This would cause a schism and would most certainly become the first shot at developing a mix of science and religion for the ecumenical world order.