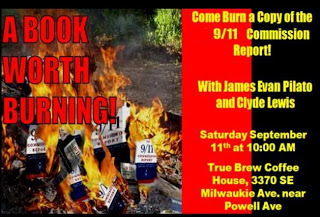 Update: Thanks to everyone that came out & made this event a success - and thanks to Infowars, Truth Excavator & Freedom's Phoenix for spreading the word! 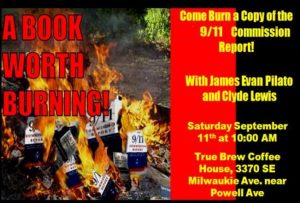 Portland, OR, September 11th, 2010: Independent journalist/talk show host James Evan Pilato and national talk show host Clyde Lewis will appear together at the True Brew Coffee House, 3370 SE Milwaukie Ave. near Powell for a peaceful gathering on the 9th anniversary of the September 11th attacks. During the gathering there will be public speakers and guests talking about 9/11 and what is being done to constructively heal after this devastating moment in history. James Evan Pilato, an independent journalist from MediaMonarchy.com and the world-renowned CorbettReport.com will team up with national talk show host Clyde Lewis of Ground Zero Radio to burn copies of the 9/11 Commission report at 1:00 PM.

This is in protest of the “International Burn the Quran Day” proposed by the Dove World Outreach Center and the Westboro Baptist Church. Pilato in a statement said “If you want to find a book of lies and half truths you don’t need to look any further than the slap shot 9/11 report.” Clyde Lewis concurs by stating “The 9/11 report has been held as the definitive account of what happened on September 11th, however many respected senior members of the military, intelligence services and government have expressed significant criticism of the 9/11 Commission Report and it has generated more hate and misunderstanding than the Quran or any other religious book.” The book burning will take place after the festivities and will be used to urge the public to demand the truth about the attacks and the prolonged war that followed. We urge the media to attend this event.