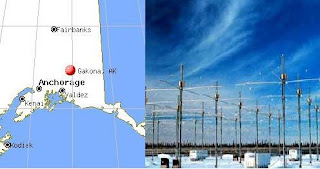 Is everyone imagining things by suspecting HAARP of causing 8.9 earthquake off the coast near Honshu, Japan on March 11?  Was HAARP turned on March 9 just in time for foreshocks?  Just a year ago, Venezuela Preseident Hugo Chavez suspected US hit Haiti with earthquake weapon. In January, HAARP was suspected for dead birds, fish around the world. In 2008, You Tube video captured rainbow colored clouds over Sichuan China just prior to 7.8 earthquake and thought to be signature of HAARP's disturbance of the atmosphere. Benjamin Fulford, former Forbes Asia Bureau chief, reviews attacks on Japan using HAARP, including 2007 Nigata, Japan earthquake in this You Tube video.

Fulford fingers George Bush Sr. faction as responsible for current HAARP attack It must be remembered, however, Fulford supposedly ambushed David Rockefeller in 2007 in an advertised confrontational interview available on You Tube. There are rumors Fulford is a Zionist/Rockefeller agent. Fulford's access to both Rockefeller and the Yakuza make him suspect as some kind of agent. It is the case, large amounts of suspicion surround HAARP as an offensive weapon and busted in many minds for current quake!