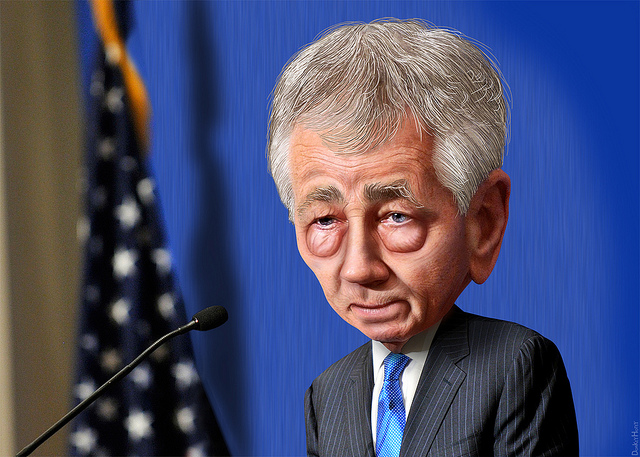 Hagel’s Ritual Resignation and ‘The War Ahead’

from 21stcenturywire.com: Another ritual resignation took place today in Washington…

Defense Secretary Chuck Hagel
(R) threw in the towel today by tendering his resignation to President
Barack Obama, amidst all the usual pomp and circumstance at the White
House (America’s equivalent to a royal divorce).

His swift
departure could be for a number of reasons – health, stress from having
to lie to the public on a daily basis, or simply poor performance.

Did Hagel really resign, or was he actually relieved of duty by his betters? The writing was already on the wall…

The
whole ceremony couldn’t be more seedy or over the top. Obama was on his
right, leaning in (too close for comfort), and Joe Biden on his left,
with Hagel suffocating in the middle trying to give his exit speech.
When the President gives a long-winded speech about what “close friends”
they are and when Hagel has to kiss the ring of Biden, referring to
Uncle Joe as his mentor, you can be sure that the knife in Hagel’s back was buried deep indeed.

You could read it on his face from day one. Hagel wore a permanent look
of awkwardness at every press briefing, having to re-spin the spin
coming out of the White House.

Hagel’s
appointment in February 2013 was a political one – from a blue White
House wanting some red trimming for its kitchen cabinet. He was
labeled a ‘self-hating Republican’ by right-wingsters for flying under
Obama’s command wing, and couldn’t have landed the job during a worse
period in US and World history. He stepped into a swamp of White House
and Neoconservative agendas already well underway: NATO’s encirclement
of Russia, a military pivot towards Asia, no-win hangovers in Iraq and
Afghanistan, the road-to-nowhere ‘peace process’ in Israel-Palestine, a
nuclear standoff with Iran, and a covert, proxy war in Syria.

As
an enlisted combat veteran himself, men like Hagel are endangered
species these days, with most contemporary DoD heads being bureaucrats
or ‘businessmen’, and completely unlike his predecessors – a career
Mandarin like Leon Panetta, a career insider and super-spook like Robert Gates, or a passive income-obsessed board room junky like Donald Rumsfeld.

Maybe
it was the ISIS crisis which did Hagel in. Hagel’s main problem, aside
from the fact that he was subservient enough for the Emperor in the
White House, is that he was not hawkish enough for war maniacs like
Senator John McCain (R-AZ) and confused Strangelove-types like General Martin Dempsey.

Notice how it’s no longer in vogue to fire anyone
in central government these days. It’s a new sort of gentleman’s
agreement between high-profile bureaucrats. Mostly it’s the fear of
legal reprisals should a sacking affect their future earnings.

In
truth, Obama (and his handlers) needed a new face for the War on ISIS.
White House officials speaking to the press on conditions of anonymity,
said that the President’s ‘removal’ of Chuck Hagel was, “A recognition
that the Islamic State (ISIS/ISIL) would require a different set of
skills than those Hagel was brought on to employ”.

At
the end of October, Hagel wrote a memo to the White House which was said
to be highly critical of Obama’s perceived ‘fight against ISIS’. What
Hagel asked in his memo was only common sense, but for a wishy-washy,
opinion poll-obsessed Administration it might as well have been a plot
for a coup d’état. He asked the White House to clearly define
its strategy against ISIS and its plans for ‘regime change’ of the Assad
government in Damascus. In Hagel’s own words, “A sharper view is needed
of what to do about the Assad regime”. It wasn’t the content of this
memo which infuriated the President and his handlers, however, it was
the challenge to the President’s authority, akin to a member of the
court challenging the King in public on matters of state. White
House handlers would have been furious because of how this challenge
might negatively affect opinion polls and approval ratings in the run-up
to the all-important November 2014 midterm elections. The Democrats
lost the Senate in the midterms, so maybe Hagel was, in part, a casualty
of that political battle.

On November 13, at the Senate Armed Services Committee
hearing on Capitol Hill, senior US officials denied that the Obama
administration saw the removal of Bashar al-Assad as “the key plank in
its strategy to defeat the Islamic State (IS)”, but more likely it was a
harbinger of Hagel’s removal from the cabinet.

Upon
questioning, Hagel’s response was, “We could change Assad today, and
that’s not going to change all the dynamics,” he said. “Who are you
going to replace Assad with? What kind of an army can take on [IS]?”

“Assad’s
part of the equation, of course,” Hagel said. But “just alone dealing
with Assad, where we are now … that’s not going to put [IS] back in the
box.”

History will eventually show (we hope) that the elephant in the room isn’t ‘how to deal with ISIS’, but how to conceal and whitewash Washington’s integral role in building up, funding, training and arming today’s extremist ISIS fighters.

When
Hagel arrived as Secretary of Defense, it was hailed as a
‘breakthrough’, because so many saw Hagel as more of a dove than the
typical DC hawk. No doubt, he will be replaced by a more able hawk than
himself, and one that will better further a ‘New American Century’. His exit paves the way for January 2015 and the new look Republican
US Senate, led by John McCain who will certainly be issuing some loud
demands – not just for more billions in aid and arms for “moderate
rebels” in Syria, but for boots on the ground in Iraq and Syria.

Washington’s
and Tel Aviv’s long-term agenda to reform the Middle East and
isolate Iran is running behind schedule and Hagel’s caution was not
helping, so the new Secretary will need to be a lot more chummy with
chilly globalist operatives like Susan Rice and Samantha Power.

ISIS
is a big issue in the US media, but perhaps a bigger geopolitical
cloud was United States pushing NATO right up to the borders of Russia,
and egging on its NATO allies for a renewed conflict between the
West and Russia. A US State Department and CIA-back ouster of a
democratically elected government in Kiev only ramped-up those tensions,
repositioning the geopolitical chessboard back into previously
abandoned Cold War positions. 2014 proved that Washington DC was more
than willing to trash the Warsaw Pact, breaking promises made in perpetuity between previous leaders of the east and west, opting instead for a neocolonial Treaty of Versailles power-politics mentality.Sheepish
wolves like Martin Dempsey will be more than happy to keep taking
more wild stabs in the dark, eager it seems to see ever more bloodshed
in the Middle East. Dempsey wants 15,000 more Syrian ‘rebels’ (foreign
fighters for hire, and future ISIS members) in order, he says, to “put
enough pressure on [IS] forces in eastern and northern Syria”.

Indeed, that’s exactly where the conversation will be heading come January.“It
will be a force large enough to defend initially so that it can
actually hold territory,” Dempsey said. “And then it should have the
capability over time to become offensive.”

As we can see from his
comments, Dempsey, like the other tired old dogs of war in Washington,
is completely detached from reality. But they keep giving it that old
Ivy League try…

“We’ll just give it another try. It might work this time…”

The names and faces may change, but the agenda rolls on.