Hansen’s mea culpa? Says global warming has slowed due to surge in coal use 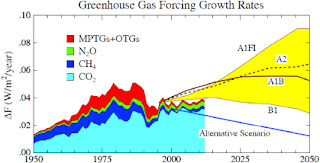 from hockeyschtick.blogspot.jp: A paper published today by James Hansen has some startling admissions, including:

- the growth rate of the greenhouse gas forcing has "remained below the peak values reached in the 1970s and early 1980s, has been relatively stable for about 20 years, and is falling below IPCC (2001) scenarios."

- the airborne fraction of CO2 [the ratio of observed atmospheric CO2 increase to fossil fuel CO2 emissions] has decreased over the past 50 years, especially after the year 2000

- Hansen believes the explanation for this conundrum is CO2 fertilization of the biosphere from "the surge of fossil fuel use, mainly coal."

- "the surge of fossil fuel emissions, especially from coal burning, along with the increasing atmospheric CO2 level is 'fertilizing' the biosphere, and thus limiting the growth of atmospheric CO2."