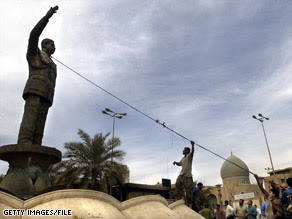 from cnn: Six years ago Thursday, then-President George W. Bush appeared on television screens across America and somberly addressed the nation. "My fellow citizens," he began his four-minute speech, "at this hour, American and coalition forces are in the early stages of military operations to disarm Iraq, to free its people, and to defend the world from grave danger." Six years later, the conflict in Iraq drags on - with war-fatigued Americans shoving the military operation to the deep recesses of their psyches as they grapple with an economic crisis at home. Only 10 percent of voters questioned in exit polls during the November presidential elections picked the war as their top issue. Sixty-two percent said the economy was. "This is already one of the longest wars in American history. There's nothing new in Iraq," said Steven Roberts, a professor of media studies at the George Washington University. "We've read the stories of instability in the government a hundred times. Every single possible story has been told, and so there is enormous fatigue about Iraq."

iraq, six years in
from danger room: Six years ago today, the U.S. launched its attack on Iraq. If you've spent time there since the war began - either in uniform, or as a civilian - we'd love to hear about your experiences there. Drop us a line, or sound off in the comments below. Meanwhile, you can read more than 30 Iraq diary entries than Nathan and I kept during 2007 and 2008. Or you can check out pictures and stories from my 2005 trip. A sample: The Baghdad Bomb Squad, Welcoming the Sabbath, with Pistols, Iraq Diary: Anbar's Boys in Blue, Why Jake Volunteered for a Third Tour, The Stink of Tarmiyah, Killing Time, Captain America in the Forever War

secret emails show iraq dossier was 'sexed up'
from independent: Secret Whitehall emails released yesterday provide damning new evidence that the notorious dossier making the case for invading Iraq was "sexed up". They disclose that the intelligence services were sceptical over the "iffy drafting" of government claims that Saddam Hussein could mount a missile strike on his neighbours within 45 minutes of ordering an attack.