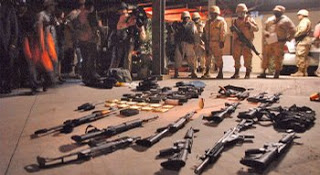 from raw replay: A Harvard economist says that legalizing marijuana would not go far enough to stop border violence. Jeffrey Miron told CNN’s Kiran Chetry that all drugs should be legalized. “A lot of the violence we’re seeing and a lot of the underground market is not related to marijuana but related to the other drugs. If we only did marijuana we would only have a small impact on the violence and corruption and disruption of other countries that is caused by U.S. prohibition of drugs and the U.S. forcing prohibition of drugs on other countries,” he said. This video is from CNN’s American Morning, broadcast Mar. 24, 2009.

from washington post: President Obama is finalizing plans to move federal agents, equipment and other resources to the border with Mexico to support Mexican President Felipe Calderón's campaign against violent drug cartels, according to U.S. security officials. In Obama's first major domestic security initiative, administration officials are expected to announce as early as this week a crackdown on the supply of weapons and cash moving from the United States into Mexico that helps sustain that country's narco-traffickers, officials said. The announcement sets the stage for Mexico City visits by three Cabinet members, beginning Wednesday with Secretary of State Hillary Rodham Clinton and followed next week by Attorney General Eric H. Holder Jr. and Homeland Security Secretary Janet Napolitano.

video update1: obama opposes marijuana legalization
from raw replay: President Obama told a virtual town hall on Thursday that legalizing marijuana is the wrong economic strategy for the country. The White House press corps pressed Robert Gibbs if Obama meant to suggest that he was open to marijuana legalization. Gibbs was quick to say that Obama opposed legalization. “He doesn’t think that is the right plan for America,” he said.

video update2: legalizing pot would take away 70% of drug cartel profits
from russia today: Legalizing marijuana would eliminate the huge profits taken in by the Mexican drug cartels, which are threatening the stability of Mexico and the U.S., said Aaron Houston, a pro-pot advocate in Washington.