high bacteria levels in meat at US stores: report

with superbugs contaminating fresh meat,
the truth comes out about food safety bill 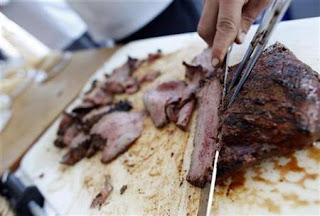 from reuters: Meat found on grocery store shelves often contains high levels of bacteria, with more than half of the bacteria resistant to multiple types of antibiotics, a study released on Friday said. The meat is still safe to eat but consumers should take precautions especially in handling and cooking, the chief researcher for the study said.

The Translational Genomics Research Institute, a nonprofit biomedical research group, checked 136 meat samples from 26 grocery stores in Illinois, Florida, California, Arizona and Washington, D.C. Dr. Lance Price, the head researcher on the study, said high levels of Staphylococcus aureus (S.Aureus) bacteria were found in the meat. “Staph causes hundreds of thousands of infections in the United States every year,” Price said in an interview. “It causes a whole slew of infections ranging from skin infections to really bad respiratory infections like pneumonia.”

The Food and Drug Administration said it is aware of the study’s findings, and similar studies of antibiotic-resistant bacteria in meats, and is working with the U.S. Agriculture Department and the Centers for Disease Control and Prevention on the issue.

Price said the most significant finding is not the level of bacteria on the meats, but rather how the bacteria are becoming strongly resistant to antibiotics used to treat animals before slaughter.

“The bacteria is always going to be there. But the reason why they’re resistant is directly related to antibiotic use in food animal production,” Price said. “Antibiotic resistance is one of the greatest threats to public health we face today… This is one more reason to be very careful when you’re handling raw meat and poultry in the kitchen,” Price said. “You can cook away these bacteria. But the problem is when you bring in that raw product, you almost inevitably contaminate your kitchen with these bacteria.”

Turkey was the meat that most often contained bacteria resistant to three or more antibiotics, followed by pork, beef and chicken.

The study was published in the journal Clinical Infectious Diseases on Friday and is available here.

2 responses to “high bacteria levels in meat at US stores: report”