from twilight language: Walter Cronkite covered many mysteries and disasters during his lifetime. His Dutch family's surname originally was Krankheyt, which intriguingly means "illness." Growing up, Cronkite was a member of the Houston chapter of DeMolay, a Masonic fraternal organization for boys. Cronkite was one of eight journalists selected by the U.S. Army Air Forces to fly bombing raids over Germany in a B-17 Flying Fortress. He also landed in a glider with the 101st Airborne in Operation Market-Garden and covered the Battle of the Bulge. After the war, he covered the Nuremberg trials, and served as the United Press main reporter in Moscow for two years. Some of the historic events that were entwined with Cronkite's CBS Evening News broadcast life (1962–81) include the Dallas-based JFK assassination of 1963, the Dexter, Michigan UFO series of 1966, the Memphis-based MLK assassination in 1968, and the lunar landing of 1969.

carnaby’s widow sues, claims husband was member of cia
from khou: In April, 2008, Roland Carnaby led Houston Police on a 122 mile-per-hour chase that ended in the Galleria, all the while claiming to be a CIA agent. When he finally pulled over, police shot and killed him after he reached for something shiny. Carnaby’s widow, Susan, has filed a civil suit against the city in federal court and, in documents reviewed by 11 News, claims Carnaby was in fact working for the CIA. “The FBI and the CIA regularly fail to disclose the truth to the Houston Police Department,” one court filing said. In another, Carnaby’s attorney says he plans to call a former Secret Service agent to testify “with respect to Mr. Carnaby’s work on behalf of the Secret Service and other federal agencies as a contract informant and operative.” Randall Kallinen, Carnaby’s attorney, says he definitely was a CIA agent.

from the fbi vault: the complete saddam interviews 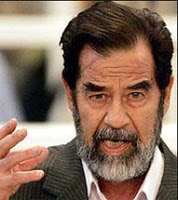 from raw story: The National Security Archive has made public the complete set of formal and informal interviews carried out by the FBI with Saddam Hussein following his capture in Iraq in late 2003. RAW STORY reported last week on the emergence of documents that showed the Bush administration's "enhanced interrogation techniques" were not needed to get Saddam to talk - instead, the FBI chose to build a rapport with the ex-dictator, a strategy that resulted in Saddam eventually opening up to his interrogators. Now, the National Security Archive has released the FBI's records of 20 interviews and four informal discussions between agents and Saddam, which took place between February and June of 2004 in the detention cell at Baghdad International Airport where Saddam was held. In the documents, "Saddam denied any connections to the 'zealot' Osama bin Laden, cited North Korea as his most likely ally in a crunch, and shared President George W. Bush's hostility towards the 'fanatic' Iranian mullahs," the archive's press release states.