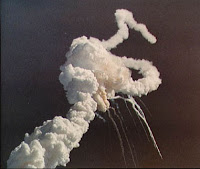 from alex constantine: The Challenger disaster took its sweet time gestating - several years to piece it all together, in fact. I'm completely aware that this story will be doubted initially by anyone unfamiliar with the many relevant facts (and by standard American donut heads long subjected to Big Cable's herd programming) - it's my unfortunate lot in life to report these things - and that's why I suggest chasing down my sources and reading anything relevant available on the Net. In the past, when I've posted this story, a Conserva-Troll invariably posts a link to it and opines with a dismissive yawn, "I don't believe the government blew up the Challenger. ... " In a fascist state, reality is squeezed through a lens of willful ignorance by media programmers and their enabling victims.

Mae Brussell's work on Challenger: There was thick layer of ice on the shuttle's launcher that morning - yet NASA claimed over the course of several days to be waiting for the temperature to rise. This is not an incidental detail. (The American prole brain is conditioned to explain essential facts away, but this one is comprehensible only in the wider context of intention in which it is consistent, not an unexplained contradiction.) I've posted this before, but like many stories I write, the significance of it is lost in a sea of Orwellian historical revision - not mine, the military-industrial media machine's. The Challenger blew up at roughly the same moment that a witness swore in to testify on federally-sanctioned heroin smuggling and money laundering - at that very moment NASA launch conditions were ideal for mass murder, as engineers from Thiokol testified openly, and prolonged flight that morning was impossible. The engineers stated that they knew the O-rings would give, that the Challenger would explode, and signed a group statement in advance that they would assume no responsibility for the decision to launch. That came from above. It is on record, not to be ignored but understood. They knew the cannon was loaded. This is not another "incidental" anomaly ... The reporters attending the drug testimony scurried out of the room when the shuttle exploded - the press never ran the story. How "coincidental." ...

Let us reconstruct the Challenger disaster and the drug testimony as they occurred - this set of facts explains the lingering anomalies, which, as I say, are not so incidental - given the bloodshed that ensued, not to mention widespread heroin addiction ... and a bonus - I tussle with a completely disingenuous Conserva-Troll.

the mystery of the missing opium (ask mi6 where it is)

from bbc: It’s a mystery that has got British law enforcement officials and others across the planet scratching their heads. Put bluntly, enough heroin to supply the world’s demand for years has simply disappeared. The United Nations Office on Drugs and Crime (UNODC) describes the situation as “a time bomb for public health and global security”. This week’s Map of the Week comes courtesy of the UNODC. It shows their latest estimate of opium production in Afghanistan - another bumper year. A crop of 7,700 tonnes will produce around 1,100 tonnes of heroin - it basically works on a 7:1 ratio. The mystery is that the global demand for heroin is less than half that. In other words, Afghanistan only needs to produce 3,500 tonnes to satisfy every known heroin user on the planet. Look at the graph, though. For the past three years, production has been running at almost twice the level of global demand. The numbers just don’t add up. 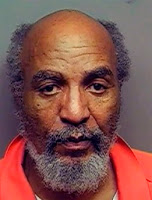 from ap: A one-time top lieutenant to Martin Luther King Jr. was sentenced Wednesday to 15 years in prison for having sex more than a decade ago with his then-teenage daughter. The Rev. James L. Bevel, 71, a key architect of the 1963 Children's Crusade in Birmingham, Ala., and other pivotal moments of the civil rights movement, was convicted earlier this year of a single count of incest. The assault occurred in the early 1990s in Loudoun County, when Bevel was working closely with the Virginia-based organization led by political extremist Lyndon LaRouche. The 15-year sentence imposed by Circuit Judge Burke McCahill was the most severe allowed. Sentencing guidelines called for probation only. 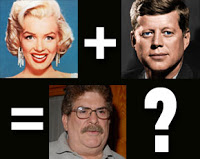 from contact music: A man claiming to be the lovechild of MARILYN MONROE and former U.S. president JOHN F. KENNEDY has launched a court battle for a share of his 'father's' estate. New Yorker John R. Burton - who has changed his name to John Fitzgerald Kennedy - has come forward 45 years after Kennedy was assassinated in Dallas, Texas. The 53-year-old has filed papers at Manhattan federal court insisting he deserves a fair share of Kennedy's fortune. He also calls for DNA testing to prove he is the late president's eldest son. The lawsuit reads, "In his will, each child of President Kennedy was to receive a certain amount of money each year pursuant to the terms in said will." Susan Frunzi, representing the Kennedy estate, tells the New York Post, "I assume it's a frivolous lawsuit, and it wouldn't be the first time that people have filed frivolous lawsuits against this family." John F. Kennedy had two children with his wife Jackie Kennedy; Caroline and John Jr., who died in a plane crash in 1999. Although he was rumoured to have had an affair with Monroe before his death in 1963, there's no evidence to suggest she bore his child.

churchill ‘bribed franco’s generals to stay out of the war’

from times online: Winston Churchill authorised millions of dollars in bribes to stop General Franco from entering the Second World War on the side of Germany, a new book claims. The British wartime leader persuaded Juan March, a Spanish banker, to act as a secret agent, organising payments of millions of dollars to the generals. In return the generals persuaded Franco not to side with Hitler. The plot was revealed by the historian Pere Ferrer in Juan March: The Most Mysterious Man in the World, after researching papers in British and US archives. In the summer of 1940 Churchill was convinced that Spain would enter the war on the side of Hitler after receiving reports that Franco and the Germans were planning to invade Gibraltar. Ferrer has claimed that a British officer, Alan Hillgarth, came up with a plan to bribe the generals, believing that Franco's high command was corrupt and, because they were not paid much, would be open to bribery.

student tracks down nazi war crimes suspect
from telegraph: The 89-year-old former member of the notorious Waffen SS, whose name cannot be revealed for legal reasons, is accused of participating in the murder of 60 Jewish slave workers in 1945. The massacre took place in Deutsch Schuetzen in Austria and the victims were buried in a mass grave which was only discovered in 1995. The name of the man first occurred in a trial in 1946, where witnesses claimed he took part in the execution. He was however never charged and returned to his home in the German state of North Rhine Westphalia where he still lives under his real name. Andreas Foster, 27, a student of political science in Vienna, was researching the case for an university project and acquired documents on the man from German archives. After realising that authorities never attempted to arrest the man, he managed to track him down by a simple search in the telephone directory. "The Waffen SS man was mentioned by name in court files and other documents and his identity has been known since 1946," said Mr Foster. He alerted his university mentor, Professor Walter Manoschek, who then travelled to Germany unannounced and visited the alleged war criminal and interviewed him on camera. In the interviews, the man claimed not to be able to remember anything about the massacre but confirmed that he was stationed on the site as a member of the SS at the time when it happened. Prof Manoschek then compiled a file on the case, including the video tapes, and sent it to German prosecutors who have now opened an investigation. "We will examine and evaluate the vast amount of material and interview the possible witnesses," a spokesman for the prosecutors in charge of Nazi war crimes said. 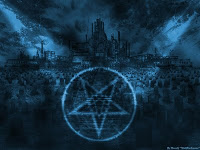 from waikato times: Waikato University has abruptly pulled a student's thesis from its library after complaints from the subject of the research - a right-wing extremist. The thesis, exploring satanic and neo-Nazi themes, had already been marked and published, earning its author top marks. It is a highly unusual move to remove a student's work after publication. The thesis, published six months ago and titled Dreamers of the Dark: Kerry Bolton and the Order of the Left Hand Path, a Case-study of a Satanic/Neo Nazi Synthesis, was submitted as part of a Masters degree by philosophy and religious studies student Roel Van Leeuwen. Mr Bolton is a well-known figure both in New Zealand and Australia in the far-right movement, and is a former National Front secretary. The university's student newspaper, Nexus, reported today the thesis was available to read at the university's library and on-line publishing repository, as recently as two weeks ago. Nexus reported neither Mr Van Leeuwen nor the thesis co-supervisor, Professor Dov Bing, were notified prior to its sudden removal.

from constantine institute: The Nazis were preparing public TV screens, including sets installed in public laundries so housewives could tune in, across the nation, according to a Russian documentary based on papers and tapes found in his bunker. Prototype programmes included the filming of executions of supposed traitors to the Nazis and an early reality TV show, depicting the wholesome Aryan life of a young German couple for the rest of the population to model themselves on. The crude system would transmit the TV picture to a screen and the sound to a radio receiver. The discovery came to light first in 1945, when dozens of boxes with tapes were found in the ruins of the Reich Council by Soviet soldiers, the programme claims. 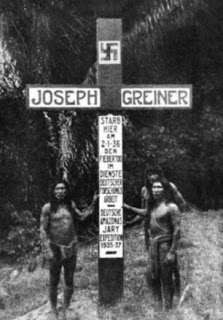 from daily mail: They left their scars on the world even here, deep in the Amazon rainforest. A few etched swastikas on a wooden cross and some grave markers reveal how the Nazis planned to create a colony for the glory of the Fatherland. The graveyard and structures built by the fanatical explorers were left for decades, forgotten, to rot in the jungle. But they were rediscovered during research for a book that chronicles the Nazis' madcap plan back in the 1930s to create an outpost for a master race thousands of miles from Germany. The book, The Guayana-Projekt. A German Adventure On The Amazon, says Hitler's henchmen believed they were destined to settle the world like pioneers of America's Wild West.